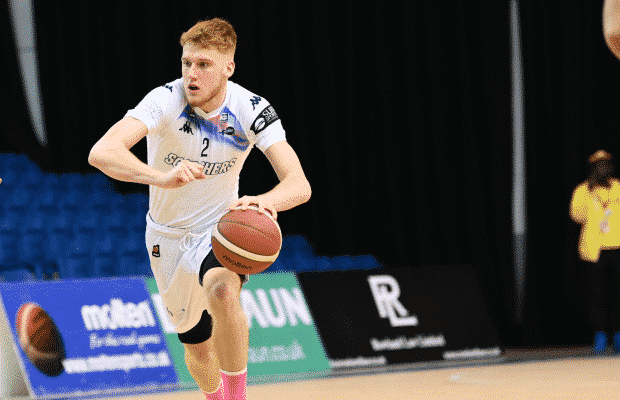 Three teams are competing for the final spot in the playoffs, while the title could be decided on Wednesday.

Bristol Flyers, Surrey Scorchers and Manchester Giants all have 10 league wins apiece ahead of the final few games in the regular season with a top-of-the-table clash also on this week’s menu.

Not there, yet. What could have been (it couldn’t as London keep winning) a crowning moment on their rivals’ court on Friday night turned into a sour 10-point defeat on Sky Sports. The Riders led by 15 in a strong start, but eventually went down to their fifth league defeat in 27 games.

Geno Crandall posted a double-double of 16 points and 10 rebounds as well as six assists from the bench with the visitors giving up 24 turnovers to their opponents’ 8. Rob Paternostro’s side can put the title race to bed for good on Wednesday if they beat London at the Copper Box. If not, then they still require two results.

Eight straight. The Lions have done all they can to maintain life in the title race and if they can beat Leicester on Wednesday, it would really put pressure on the league-leaders ahead of their weekend double-header.

London pulled clear of Cheshire in midweek for a 26-point victory before DeAndre Liggins dropped 30 points to lead his side past Surrey for a battling eight-point success. They completed another week of three victories with an 11-point triumph over Bristol behind 19 points from Dirk Williams. Still four games to play.

Plymouth returned to winning ways with convincing displays against Surrey and Cheshire, though they have seen the departures of Prince Ibeh and Denzel Ubiaro this week. The Raiders are locked into the top four and could still leapfrog London for their highest BBL league finish.

Mike Morsell and Rickey McGill combined for 43 points in a dominant win over Surrey, while Ashley Hamilton poured in 25 points on 7-of-8 shooting along with five boards and four assists off the bench in the victory in the North-West. They still have a say on the playoffs race with trips to Bristol and Surrey amongst their final three games.

The writing appeared to be on the wall early in their encounter with Leicester, but the Eagles pulled off an impressive recovery with a dominant third period setting the platform for a confidence-boosting victory over their rivals.

Justin Gordon top scored with 24 points with Rahmon Fletcher adding 23 points and nine assists, though Newcastle then had to dig deep away at Glasgow as they eventually secured a two-point success with their place amongst the top four almost secured – and they will host the first legs of the quarter-final ties.

Talk about getting ready for the playoffs. Sheffield are looking ready for the knockouts with a determined effort to come through two games in overtime, first beating Bristol on the road before actually needing two extra periods to see off Worcester as Antwon Lillard produced the heroics with a game-winner at the buzzer.

Lillard finished with 20-8-6 with his fifth triple of the contest sealing the win. Away against the Flyers, Jeremy Hemsley starred with a 30-point haul as the Sharks weathered their opponents’ late rally to prevail in the extra period. Trips to Surrey and Plymouth precede a home finale against London, who could also be their opposition in the first round of the playoffs.

It’s now one win from their last seven in the league for Cheshire as their red-hot form through February has cooled somewhat, having only just got Kahron Ross back from a recent injury. Ben Thomas’ side threatened a comeback against London before a 27-9 fourth and they then lost by 17 at home to Plymouth.

Ross top scored in both defeats, netting 18 points alongside Mike McCall in Sunday’s defeat. Top four hopes have ended, but the Phoenix will still be dangerous opposition come playoffs time and they close out the regular season at home to top and bottom as Leicester and Glasgow both visit.

Worcester are in, and won’t have the drama of making the playoffs in the coming days, but they will want to try to improve on their current position in seventh in order to avoid one of the top-two in their post-season opener. Matt Newby’s side only have one league game left in the regular season after suffering an agonising loss to Sheffield at the buzzer in a double-overtime thriller.

Jordan Williams finished with a near triple-double of 18 points, 10 rebounds and nine assists in the defeat in which the visitors had led by 12. Worcester complete their league campaign by hosting Newcastle on Friday night with fifth place still a possibility if Sheffield lose their final three games.

Defeats to Plymouth and London on the road left no doubt that their encounter with Manchester was a must-win and the Scorchers duly delivered for a four-point triumph that not only secured that head-to-head, but put them level with Bristol with a 10-17 record – though they need to better their final three results.

Martelle McLemore was one of five players in double figures with 17 points and they have the familiar surroundings of Surrey Sports Park for two of their final three games with a trip to Newcastle either side of home games against Sheffield and Plymouth. Whatever Bristol do, Surrey need to better, while Manchester are still very much in the mix, too.

The Giants recorded a third straight win, but couldn’t extend their streak to four as they need help elsewhere in their quest for the playoffs. A 14-30 third quarter effort sparked turnaround for a convincing win in Glasgow before suffering a four-point loss to Surrey with the head-to-head on the line.

David Ulph had 13 points and 14 rebounds in the defeat with another important clash to follow. Manchester host Bristol on Sunday in their penultimate game before welcoming the Lions. Two wins may not even be enough to sneak back into the top eight, though beating Bristol could be enough if their rivals lose at least one of their other two games and Surrey don’t pick up a win – lots can still happen.

Four defeats on the spin now for the Flyers, but they still control their fate in the battle for the playoffs as they occupy the coveted final spot with three games remaining. Despite a combined 54 points from Justin Baker and Eric Lockett – who forced overtime – they went down by five points at home to Sheffield before an 11-point loss away at London with a 26-16 third period proving costly.

Bristol have difficult games with Plymouth and Newcastle either side of their clash with Manchester that could prove decisive with the series head-to-head on the line between the two, whilst holding the tie-break over Surrey and the possible three-way tie.

Bottom place is confirmed for the Rocks just 13 months on from leading the BBL Championship standings. Their league struggles have not come as a surprise, but Gareth Murray’s side have been mostly competitive this season and proved that again at the weekend.

Glasgow led Manchester by 11 before falling away to an 18-point loss, and then came close to beating Newcastle as they came up short in a two-point loss having overturned an early 13-point deficit. The hosts had six players in double figures including 37 points from the bench with Fergus Harte netting 11 points in just nine minutes of action.

As per @dan_routledge, three teams fighting for the final spot (Bristol/Surrey can still finish 7th)!

A look at the outcomes separated by Friday’s winners (grey) ⤵️