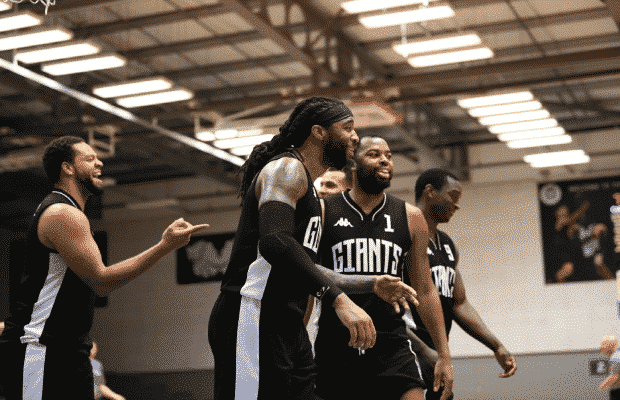 The title race may be nearing its conclusion, but the battle for the playoffs is really picking up pace ahead of the final few weeks of the regular season.

Leicester Riders are within two results of the league crown, while both Surrey Scorchers and Manchester Giants are within a victory of the eighth place.

Closing in. The Riders moved to 22-4 with wins over Worcester and Plymouth this week with the latter coming in a thrilling overtime encounter. Just two results (wins or Lions defeats) are now needed to seal top spot in the BBL Championship once again.

Rob Paternostro’s side recovered from an early 21-13 deficit at Worcester to comfortably win by 18 on the road with no player scoring more than 14 points in a balanced effort. At home to the Raiders, they outscored their opponents 17-9 in the extra period with six players in double figures including 15-7-10 from Geno Crandall off the bench.

That’s now five wins in 11 days with the Lions still with seven games left in the regular season. Their title hopes may end this week, but they are building momentum ahead of the playoffs as they move back into second spot in the standings.

DeAndre Liggins fired in 30 points in a convincing midweek win over Glasgow as the Lions knocked down a total of 20 threes before getting the job done away at Bristol for an 11-point success. Liggins again top scored with 18 points along with 10 assists with the return of Justin Robinson this past week a timely boost.

The Raiders took their league win streak to eight games with a midweek South-West derby victory before falling to the league-leading Riders in overtime, to mathematically end any hopes of the title.

Ashley Hamilton and Rickey McGill combined for 41 points in the win against Bristol as they came from eight points down. They led Leicester by four inside the final minute before a costly finish would see them ultimately come up short in the extra period, despite McGill’s 16-13-8 line.

While all the talk should have been about Rahmon Fletcher’s spectacular 38 points and nine assists, his 40-minute effort was overshadowed by Newcastle’s fourth quarter collapse at home to Manchester. From 75-60 in front at the end of the third to a four-point loss – their 10th of the league campaign.

Fletcher did have 36 through three quarters as the Eagles gained control of the contest, but having kept their opponents to 32 first-half points, they conceded 35 in the pivotal fourth. Next up, the Riders with the possibility of their long-time rivals winning the league on their home court at the Vertu Motors Arena.

After winning four straight in the league to open up March, Ben Thomas’ side suffered four straight losses before returning to winning ways on Sunday with a seven-point road win in Glasgow – with Kahron Ross back in action over the weekend.

Cheshire were outscored by 10 in the final quarter in a defeat away at Worcester with Matthew Bryan-Amaning netting 16 points against his former side, along with Mike McCall. The Phoenix then had all seven scorers in double figures in a balanced attack as they beat the Rocks to return to .500 and hold onto fifth spot in the league standings.

A mixed – and busy – week for the Wolves as their hard-fought win over Cheshire was wedged in between defeats against Leicester and Surrey. Maarten Bouwknecht had 18 points, seven rebounds and 10 assists in the Friday night home win as a strong final quarter effort was needed to overcome the visitors.

Worcester had started 21-13 up against Leicester before being kept to below 14 points in each of the following three quarters to fall to an 18-point loss. They also led Surrey by two at the end of the third, but would be undone by a 9-0 close with just two games left on their regular season schedule.

The Sharks looked in convincing form in brushing aside the challenge of Surrey on Friday night before then falling to defeat on the road at Manchester to continue their up-and-down league form. Antwon Lillard led the way in the home rout with 24 points and 10 rebounds to help his side pull clear of the playoff battle.

However, a defeat to the Giants has kept them within reach of the chasing pack as Atiba Lyons’ side dropped to below .500 with a disappointing display. They were held to 33% shooting in the 19-point defeat and cannot afford repeat performances as they take on Bristol and Worcester this weekend.

Momentum from their big win over Newcastle was stalled in a heavy loss at Sheffield, but the Scorchers bounced back to pick up an impressive double-digit win over Worcester in a timely victory to keep their top eight hopes on track.

Surrey already trailed by 19 in the first half on the road with Tony Hicks the only player in double figures with 21 in defeat. He then had 18 points and 10 assists at the Surrey Sports Park with four other players netting 11+ points as a 24-12 fourth sealed the win to move within a game of Bristol with a game in hand.

Though tough trips to London and Plymouth await this week before hosting Manchester in what is likely a must-win clash in Guildford.

Hope. Two huge results for the Giants as an inspired fourth quarter comeback to beat Newcastle in the North-East was followed by a strong home display to beat Sheffield for their ninth win – closing the gap on eighth-placed Bristol, but with just four games remaining.

Sam Cassell had 22 points and nine assists against the Eagles as his side wiped out a 16-point deficit with a stunning final quarter that included a vital four-point play down the stretch from the American. Three players scored 18 points apiece in Sunday’s win as Manchester eased to a 19-point success to continue their charge.

All of a sudden, Manchester have a real chance of reviving their season with games against Glasgow, Surrey and Bristol to come, though they may need to win all three.

Two defeats this week for the Flyers sees them in the vulnerable position of being just a win ahead of the two chasing sides that are outside of the playoff spots. Andreas Kapoulas’ side lost their derby matchup with Plymouth by 11 in midweek and suffered the same margin of defeat at home to the Lions.

Bristol had led 51-55 at the end of the third on Wednesday before a 23-10 fourth ended their victory chances with Josh Wilcher finishing with 16 points. They finished strong against London, but the damage had been done having been down as many as 22 with their opponents hitting 16 threes. Sheffield next on Friday.

A drop to 10th in our rankings is reflective of results elsewhere and taking into consideration the run-in with games against London and Plymouth also on the horizon.

From top to bottom, Glasgow’s fate as the basement side is almost sealed with their slim playoff hopes mathematically ending this past week with two more defeats to drop to 4-21. They have the chance to take the head-to-head over Manchester on Friday, but defeat will confirm 11th place.

The Rocks went down to a 37-point loss in London in midweek as they struggled to contain the barrage of outside shooting. It was a closer affair at home to Cheshire as they led at half-time before a 20-31 third swung the momentum. Gareth Murray had 23 points in defeat with Boban Jacdonmi adding 17 points and 15 rebounds.