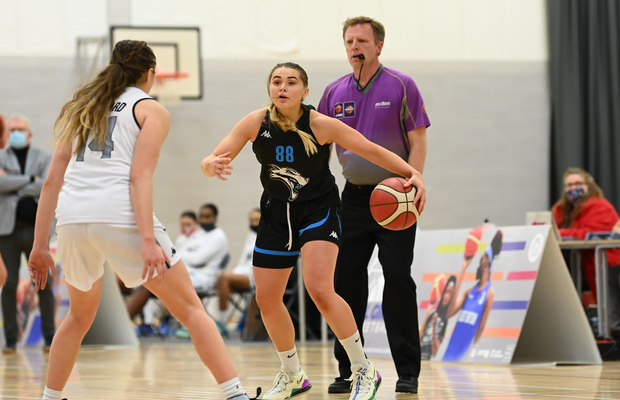 The top two in the league added to their unbeaten starts this past week with only one team now waiting to get off the mark.

Oaklands ended their losing run to kickstart their league campaign, while three of the four semi-finalists in the Trophy are now confirmed.

Six wins from six in the league now for the Riders and a perfect 12-0 record in all competitions with their last defeat dating back to February 29th, 2020. However, it was a challenging week as they were given a stern test on the road then confirmed the departures of Kate Oliver and Sara Hinriksdottir.

Holly Winterburn led the way with an efficient 22 points along with six rebounds and four assists in the win away at Oaklands as a 12-2 run across quarters proved pivotal. Azania Stewart has come out of retirement with American duo Amber Smith and Maya Brewer arriving as replacements.

The Lions stay rolling. They took their franchise record league winning streak to five games as they enjoyed an 18-point win at home to Nottingham to wrap up the head-to-head in convincing fashion.

Kennedy Leonard ran the show with 21 points and 11 assists as BA dominated the fourth quarter 22-9 with Stephanie Umeh also finishing with 21 points. Mark Clark’s side receive a bye into the semi-finals of the Trophy and next host bottom-placed Durham at the weekend.

FEATURE: Shanice Beckford-Norton hungry for success with an eye on the future with Lions

Sevenoaks’ highly-anticipated Trophy clash with the Lions came too soon as they had to forfeit due to the league’s COVID-19 regulations having postponed two league games last week. They’re still scheduled to face Manchester at the weekend, at this moment.

Make that four wins in a row for the Mystics, with all four coming away from home. Manchester booked their spot in a semi-final of the Trophy for the first time before moving above .500 in the league as they eased past Durham on their continued travels.

Ebony Horton top scored with 19 points in the midweek win over Newcastle as they powered to the finish line for a 22-point triumph. The scoring was spread out throughout the roster in league action with Horton again leading the way with 15 points, while four players had 11 points and Hannah Shaw had a 10-point, 10-rebound double-double.

The Wildcats suffered another double-digit loss at the hands of the Lions, though they were able to welcome back Siobhan Prior and Simone Costa. Jasmine Joyner’s impact was limited by foul trouble with Chelsey Shumpert held to 4-of-15 shooting as Nottingham falling away in the fourth quarter after a competitive start.

They gifted the Lions 30 points from turnovers, whilst benefiting from just six points the other way and the Wildcats return to action with a home quarter-final in the Trophy against Durham before a trip to Newcastle in what would be their 10th league game so far.

An immediate return to winning ways for the Rebels as they moved to a 4-2 record in the league after overcoming Durham by 10 on their home floor. Angel Waithe had 22 points and 10 rebounds for a double-double with Carla Bieg adding five assists to 14 points.

Essex continue to remain at home this weekend with a double-header as they host unbeaten Leicester on Friday night before turning their attentions to Oaklands with a chance to improve on fourth spot in the league standings. They then hit a run of six straight games on the road through March-April.

A good week for the Wolves. An improved performance saw them compete with the league-leading Riders, they announced the signing of GB guard Melita Emanuel-Carr then claimed their first league victory by overcoming Caledonia on their travels.

Louise Rouse top scored with 12 points against Leicester as the visitors eventually pulled away for a flattering 10-point success, but the Wolves took the confidence into Sunday for a 10-point victory of their own to break their league duck as Amari Carter had a team-high 20 points. They next face Cardiff with Emanuel-Carr’s debut imminent before visiting Essex for a third straight road trip.

A mixed week for the Pride as they bounced back from a heavy defeat in the Trophy to see off Newcastle for their second league victory as Sian Phillips had two monster performances. First, 17 points, 15 rebounds, six assists and six blocks against Manchester before a 28/23 double-double along with six steals in the league win.

Pollyanna Storie weighed in with 20 points for Caledonia as they dominated the middle periods to help set up a five-point victory over the struggling Eagles. The Scottish side are back at home this weekend as they take on Oaklands with a chance to further climb the league standings.

An important win for the Eagles – just their second from 10 league games so far as they avenged a recent close defeat at home to Cardiff by claiming a 19-point success on the road. Their Trophy run had ended in midweek as they suffered a heavy defeat at home to Manchester.

The response was an impressive one with a collective effort inspiring a convincing victory with six players scoring at least eight points, led by Alison Gorrell’s 19-point effort. Maddy McVicar had a double-double, while there were breakout contributions from Orieoma Chukwu-Etu and Amelia Oates in the win.

A tough loss for the Archers as they were unable to recover from a slow start in a 19-point loss at home to Newcastle. Sara Jorgensen’s late basket had given Cardiff the win on the road when the two teams met recently, but this was a different encounter.

Cristina Bigica and Jorgensen both had 14 points apiece in defeat with the hosts shooting 59% from inside the arc, but were 5-of-25 from 3-point range and only 54% from the line with nine assists to 15 turnovers. Now at 2-2 in the league, the Archers host Oaklands in midweek in a big league clash.

Durham are still waiting for their first win this season as they dropped to 0-5 in the league with two more defeats this week, though encouraging signs of progress.

The Palatinates picked up Hungarian Jazmin Gyulai from ARU and despite a 20-17-7 line from Kara Elderkin, they fell to an 18-point loss at home to Manchester. They were more competitive on the road in a 10-point defeat at Essex with Claire Paxton leading the resistance with 21 points. A quarter-final trip to Nottingham is next tonight.

Related ItemsFeaturedWBBL 2020-21WBBL Power Rankingswomen
← Previous Story Shanice Beckford-Norton hungry for success with an eye on the future with Lions
Next Story → Ashleigh Munns: We’ve proved that we can compete at this level