Shanice Beckford-Norton hungry for success with an eye on the future with Lions - Hoopsfix.com 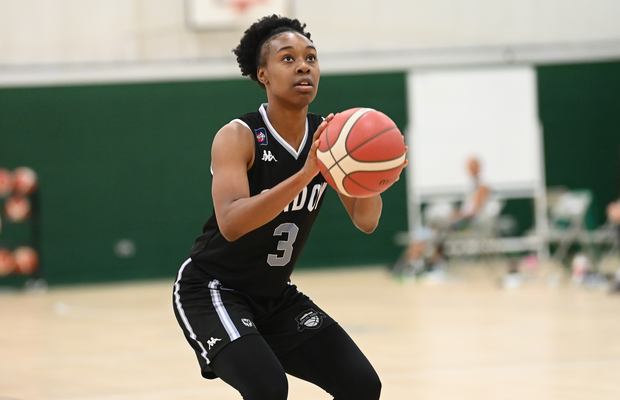 Shanice Beckford-Norton believes BA London Lions are ready to show they can compete with the league’s best having made an unbeaten start to their league campaign.

The club has enjoyed a change in fortunes this season with their new-look roster – benefiting from 777’s takeover of the London Lions BBL side – making a 5-0 start in Championship play after failing to win any of their 16 league games last season.

@AbbeyBasketball have now won four league games in a row for the first time in the WBBL – having started 0-16 in last season's curtailed Championship campaign!

Their only on-court blemish – COVID regulations aside – came in their season opener in the Cup when they were beaten 50-60 at home to Sevenoaks Suns, but the Lions have continued to improve in the 100 days since.

“We’ve grown a huge amount compared to starting out in October/November,” Beckford-Norton told Hoopsfix. “There’s a real notable difference and you can see how we recognise each other’s strengths.

“We’re still learning, we still mess things up, but we go back, watch film and work on absolutely everything we can.

“We’re more of a focused team now and really looking forward to the next few games to continue to bring the heat.”

The WBBL has been taken over somewhat by Sevenoaks Suns and Leicester Riders in recent years with the two teams combining for nine of the last 10 pieces of silverware on offer, since Nottingham Wildcats won the Cup title in 2018.

And, it is the Suns and Riders that stand in the way of Barking Abbey if they are to make it to their second WBBL Trophy final having finished as runners-up to Sheffield Hatters five years ago.

“I think it would be huge,” Beckford-Norton said of a potential victory. “With how Leicester and Sevenoaks are looking this season, it would show how strong we are and that there’s a reason we are where we are.

“We are a team everyone should be looking out for, and we’re not going to hold back.”

The Lions have certainly made their mark with a talented roster with individuals that know their role and contribute towards the best interests of the team.

Cassie Breen is leading the league in scoring (24.4 ppg) and shooting above 50% from 3-point range, while Kennedy Leonard is the chart-topper in assists per game (9.0) and Stephanie Umeh is one of two players shooting over 60% from the floor.

Beckford-Norton played professionally for the first time in Germany last season, with Leonard and Breen on opposing teams, while Paige Robinson is the only senior player with previous WBBL experience having started out with Brixton Topcats before heading to college.

“We’ve all come from different places and found a way to click and gel together both on and off the court,” said Beckford-Norton.

“It’s important especially off the court because that’s helped us be more of a unit.

“We didn’t really have any expectations at the start because we were uncertain of how much of a season we would get.

“We knew the talent we had, and it’s all been about the little things of how we can utilise everyone’s strengths.”

The Lions’ British core consists of former GB Under-20 talents in Robinson, Leonard and Beckford-Norton – all aged between 22-24 – while Chantel Charles signed a two-year deal in the summer and was part of GB’s 12 that competed in the recent Women’s EuroBasket qualifiers.

Despite only being at the start of her pro career, Beckford-Norton understands the role the senior players have on the team in nurturing the academy players and inspiring the next generation.

“It’s pretty great,” she said of the British talent. “Having gone to college and represented GB, having that on our backs is a chance for the young players to see what they could do.

“They look up to us, and even though we give them a hard time at practice, we want to see them playing their hardest.

“It’s up to us to be professionals and leave some kind of legacy as role models and continue to promote the women’s game; not just in London, but the UK.”

Beckford-Norton’s own journey has come full circle back to Barking Abbey having played as a junior, with the trust in long-term coach Mark Clark making it a simple decision to return and buy into the vision.

A head coaching role of her own at Lions Basketball Club presented another chance to be a helping influence for future prospects. While COVID has limited the capacity of the role, Beckford-Norton remains committed through the realms of online workouts in amongst having a personal effect on BA’s academy products on the WBBL team.

Ines Goryanova – at just 14 – is not looking out of place despite going up against opponents at least twice her age, while fellow prospects Nikola Kuzmanovic and Nicholle Lavinier have also seen court-time opportunities this season.

“I enjoy being a leader on this team,” said Beckford-Norton. “And, thoroughly enjoy coaching kids in the UK.

“They’re not aware of the opportunities available to them. If they have the talent/ability to play any sport, then I’m here to show them what you can do.

“I really learn a lot from the kids we have [at BA] – they really come at us in practice.

“Ines has really come out and showcased what she can do, particularly in the most recent games.

“They were pretty timid at the start, maybe a little intimidated by their older team-mates, but they’ve warmed up to us – they’re attentive and always asking questions, which I love.

“To see the flip from being shy and reserved to having the confidence needed to perform has been great.”

Beckford-Norton is averaging 12.6 points, 5.8 rebounds and 4.0 assists per game through five league outings so far, having recently posted a double-double of 14 points and 10 rebounds in the win on the road at Newcastle Eagles.

The LSU graduate scored eight points in a row in a crucial spell in the fourth quarter to set up the Lions victory with Beckford-Norton forming a potent partnership with Leonard in the back-court.

“It’s almost the perfect situation,” she said. “I feel I fit in well with this team and haven’t had any problems.

“With how Kennedy is as a point guard, there’s no need to worry about not getting the ball.

“She makes great decisions all the time and as long as we keep moving, she’s going to find us.”

The Lions have made the league take notice, and now it’s about continuing their run and taking the next step. Victory over Sevenoaks would certainly be a statement of intent in pursuit of breaking into the established top-two.

“It’s about not coming away from what is working for us,” concludes Beckford-Norton. “There has been times where we creep away from what we’re best at doing.”

“We have to not let teams slow us down, we know we can run the ball.

“I’m just excited to be able to continue the season, and hope everyone stays safe and healthy.”