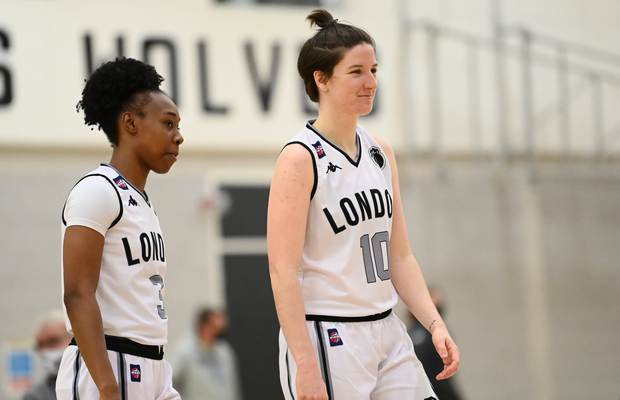 It could prove to be a pivotal weekend in the WBBL season as one undefeated side was replaced at the top by another.

Leicester Riders went from being perfect to dropping to second, and going out of the Trophy in the same weekend, while the league continues to bunch together in the middle of the pack.

Statement made. As good as the Lions have been, they hadn’t played Sevenoaks or Leicester during their unbeaten run. In Saturday’s Trophy semi-final, they quashed any possible lingering doubt over their credentials with a convincing win over the Riders to reach their first WBBL final since 2016.

Kennedy Leonard had a monster weekend with a combined 31 assists having finished with 5-11-15 in the Trophy triumph before dropping 20 points, nine rebounds and 16 assists in the 12-point win over Durham. BA were made to work to move to 6-0 in the league, but they took top spot and look every inch the team to beat.

14 straight wins in all competitions dating back to February 2020, and then back-to-back defeats in less than 24 hours. Leicester saw their lengthy streak come crashing down on the road at Essex on Friday night before hopes of a fourth consecutive Trophy title were ended in defeat to the Lions on their home floor.

Giving up 32 points in the third proved costly against the Rebels and despite 13-13-7 from Holly Winterburn, the semi-final quickly got away from the Riders. With three new players to integrate, it was unlikely to be a completely seamless process, but they will be hoping to quickly get back to winning ways in midweek.

Never write off the Suns. With everything that has gone on this season, it’s easy to forget that Sevenoaks are still unbeaten in the league with their only on-court defeat coming in the Cup final after a month’s break.

Len Busch’s side took their winning run at home in the league to 23 games with a timely reminder of how good they are as they brushed aside Manchester for a 26-point victory. Lavinia Da Silva’s return had an immediate impact with a double-double with Cat Carr and Ta’Yani Clark proving influential as ever.

Monumental. Essex pulled off a big win over Leicester on Friday night then came through another tense affair to edge out Oaklands to move to 6-2 in third place in the league standings.

The Rebels found their groove in the second half with 53 points more than some teams have managed against Leicester in an entire game this season. Angel Waithe starred in a team effort with 27 points and 15 rebounds then hit the go-ahead free throws late on Sunday. Their road run starts at Caledonia this weekend.

FEATURE – Ashleigh Munns: We’ve proved we can compete at this level

After four wins in a row, it was a return to Earth for the Mystics as they went down to a 26-point loss away at Sevenoaks. GB guards Nicolette Fong Lyew Quee (12-7-6) and Georgia Jones (11-5-8) led the resistance on a tough afternoon’s outing.

Manchester have a big week ahead as they host a wounded Riders side on Wednesday before taking on Nottingham for a place in the Trophy final. Their depth has also improved with the return of Jade Mbam from America having seen late minutes in the defeat at Surrey Sports Park.

The Wildcats eased into the semi-finals of the Trophy with an emphatic win at home to Durham in midweek – led by stand-in head coach Karen Burton, but then dropped to 5-5 in the league with a disappointing defeat on the road in Newcastle.

Chelsey Shumpert and Jasmine Joyner combined for as many points as Nottingham conceded in the 75-41 victory, but their influences were limited on Sunday with Shumpert held to 5-of-24 shooting, while Joyner fouled out of the game. They won’t be able to afford a similar performance in Saturday’s semi-final.

994. Siobhan Prior (@SiobhanPrior_4) is now just six points away from becoming the 10th member of the 1000-point club in the @WBBLofficial Championship!

Almost a huge week for the Wolves. They doubled their win tally in the league in midweek as they battled past Cardiff on the road, and then had the lead down the stretch away at Essex before coming up agonisingly short.

Still without Lizzy Harrison and Merissa Quick, Oaklands secured an eight-point win on Wednesday with a 7-16 third quarter proving the difference. Amari Carter hit six threes in a 30-point showing against the Rebels with Melita Emanuel-Carr’s late steal/score 71-72 inside the final minute, before the hosts claimed the win.

Much more like it from the Eagles. One win has finally turned into two as they enjoyed their best performance of the season in defeating Nottingham at home. Alison Gorrell continued her impressive form with 29 points, 11 rebounds and six assists having also proved a dab hand at commentary during the Eagles’ BBL game.

Abby Lowe weighed in with 21 points including a number of strong finishes, while Jorjah Smith collected 11 rebounds to go with four assists off the bench, and Maddy McVicar had 14 points. The Eagles are building momentum and occupy the eighth spot having tipped past the halfway mark of their league campaign.

2️⃣9️⃣ points for @alison_gorrell in the weekend win for @NewcastleEagle – a fifth 25+ point game in the league this season – all coming in the last six games!#BritishBasketball pic.twitter.com/CNR4qwhIdt

Cardiff came out firing in Saturday’s 13-point win over Caledonia with six early triples as they quickly racked up 45 points inside 15 minutes. They outscored their opponents 43-24 in the middle periods to take control as they improved their record to 3-3 after a midweek loss to Oaklands.

Mara Marchizotti had 18 points in the victory with Marlee Ball and Cristina Bigica both adding 17 points apiece to get the Archers back to winning ways. They had rued a costly third period in midweek, and they are back on the road this week with a tough double-header away at the top two sides.

Another setback for the Pride with their second straight loss against a potential playoff rival. Caledonia were unable to keep up with Cardiff’s red-hot start as they gave up 54 points in the first half on their way to another double-digit defeat.

The visitors had edged the opening quarter 31-29, but fell away despite a 24-point haul from Maud Ranger, while Sian Phillips had 16 points and eight rebounds. Caledonia are back at home on Saturday as they entertain Essex before a trip to Newcastle with the chance to secure the head-to-head following their recent five-point success.

After a 34-point loss in the Trophy quarter-final in midweek, there were more promising signs for Durham as they gave the unbeaten league leaders a stern test in an eventual 12-point loss. They recovered from an early 15-point hole to close to within as little as six points heading into the final three minutes.

Experienced leaders Kara Elderkin and Claire Paxton combined for 41 points – their team’s total in the Trophy –  with Durham a player down after Gerda Morkunaite suffered an injury on Wednesday. The Palatinates were 0-of-16 from three-point range against Nottingham, but knocked down seven from 19 in London.