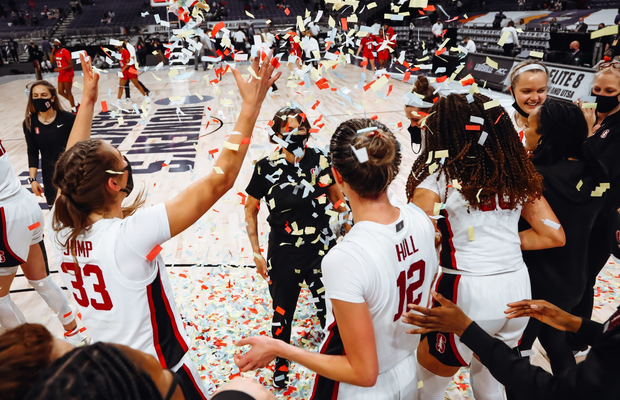 Hannah Jump is heading onto the Final Four at the NCAA Tournament with Stanford.

The British guard celebrated as the Cardinal defeated #2 seed Louisville 78-63 in a comeback triumph to win the Alamo Regional Final – with the game finishing before 4am UK time.

Jump had fired in 17 points in the 89-62 victory over Missouri State in the previous round to tie her season-high, and follows on from GB guard Karlie Samuelson in advancing this far at March Madness with Stanford.

Samuelson did so on two occasions in 2014 and 2017, while no other British female players are known to have appeared in the Final Four.

Kavell Bigby-Williams was the last Brit to do so after enjoying a strong run with Oregon in the 2017 men’s tournament.

Stanford will face South Carolina in Friday night’s Final Four clash in a repeat of the 2017 encounter having last reached the Championship game 11 years ago.

Jump – a former England Under-16 international – is averaging 7.1 points on the season in 16.7 minutes with a three-point shooting percentage of 43.2.