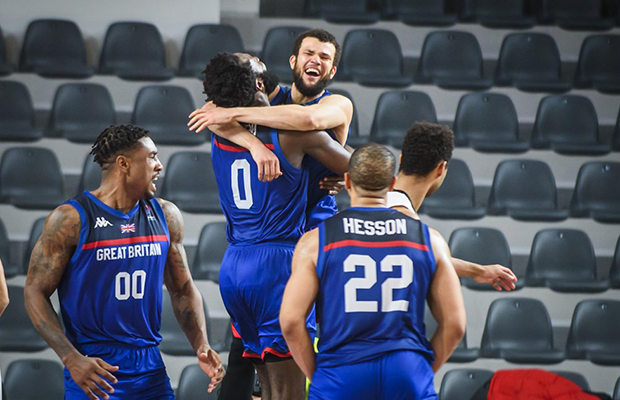 Great Britain’s Senior Men overcame Germany for a thrilling 83-81 victory to edge closer to sealing their spot at FIBA EuroBasket 2022.

Luke Nelson came up with the game-winner as GB battled to victory and will qualify if France beat Montenegro later.

Gabe Olaseni top scored with 20 points along with eight rebounds with Nelson finishing with 17, while Myles Hesson and Ovie Soko both added 12 points apiece.

“At the end of the game it kinda looks like I won the game for the team, but that was a team win from the start of the first quarter to the end of the game,” Nelson said. They are a very talented team, it was a game of runs, but we weathered the storm, especially in the fourth quarter down the stretch.

“I hit a good shot and I’m happy about that but the win belonged to the team.”

“Proud of the collective effort within our group. I think we liked the pace of the game, although we felt like Germany put too many points on the board in the first half – credit to them – but we were resilient, defensively I just thought we were so disruptive. Those last two minutes down the stretch defensively, I just thought we made the right play at the right time.

“We had 5 guys on the floor, everybody in our group was locked in to getting the right defensive stops. Credit to Luke for hitting a big shot at the end but I absolutely agree with Luke that it was a huge team win and a really proud night for British basketball.”

GB opted for a smaller lineup – with the returning Soko coming off the bench – and they made a fast start as Nelson’s drive opened the scoring before Bristol Flyers duo Ben Mockford and Teddy Okereafor both netted early triples.

Germany lost Andreas Obst to injury after a collision with Hesson, and found themselves 15-6 behind as Okereafor hit another three from the corner. Tarik Phillip made an instant impact with an immediate score from the bench with GB leading by as many as 12, though would lead 28-21 at the end of the opening quarter.

Soko made a productive start to the second with a score and an assist in successive possessions before Mockford fired in his second three to push GB ahead at eight points.

A 7-0 run saw Germany cut the gap to a single point, but GB managed to keep them at bay to maintain a lead heading into the break as they went into half-time with a slender 47-45 advantage.

There was little to separate between the two sides when play resumed as turnovers began to creep in for GB. Bennet Hundt’s three put Germany ahead for the first time at 58-57 midway through the third to spark a 9-2 run for the EuroBasket 2022 co-hosts.

Mockford’s late score ensured GB would be within two points at 66-68 heading into the crucial final 10 minutes.

It was more of the same in the fourth with a tense finish ensuing as neither side could break away. Olaseni was blocked attempting to give GB their first lead for a while with Germany punishing with a three at the other end, but the 29-year-old responded inside to make it a two-point game inside the final two minutes.

Soko would tie the game at 79-79 after GB finally converted a forced turnover with Hesson coming up with another clutch play on the defensive end. Olaseni put GB ahead with 12.9 seconds left, but Germany levelled through Maik Zirbes with barely any time left.

There was enough time for Steutel to draw up a play, and Nelson came through in the clutch for the win.