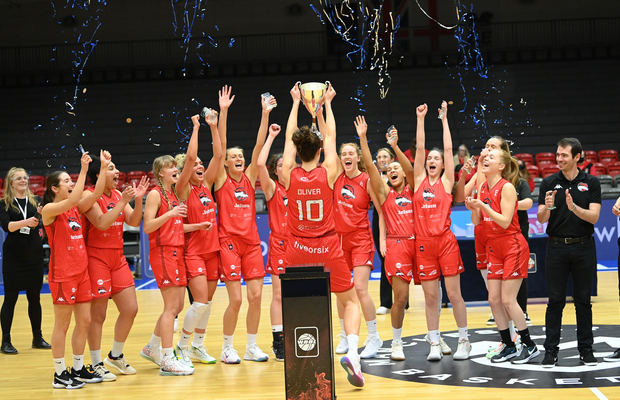 Leicester Riders claimed their first WBBL Cup title after overcoming Sevenoaks Suns with a 78-67 victory in Friday’s final, in Manchester.

Kate Oliver set the tone early in an MVP display, finishing with 18 points, 14 rebounds and five assists as the Riders maintained their 100% record on the season in dethroning the reigning champions.

Holly Winterburn filled the stat-sheet with 16 points, eight rebounds and eight assists with GB’s Hannah Robb adding an efficient 17 points from the bench, while Janice Monakana had 25 in defeat for the Suns.

The Riders raced out of the blocks with the first 11 points including consecutive mid-range jumpshots from Ella Clark and Oliver. Ta’Yani Clark stopped the rot for the Suns after a near four-minute drought, but Oliver connected again from mid-range before German guard Anna Lappenkuper fired in a corner three to make it 16-2.

Oliver hit a second three as the lead peaked at 17 points with Christina Gaskin joining in from outside, though there was an instant response from Irene Garrido-Perez to beat the buzzer and give her team some momentum despite their 24-13 deficit.

The Suns’ defence found a way to contain their opponents early – keeping Oliver scoreless in the period – though Leicester remained in control as Robb hit a triple out of a timeout.

16-year-old Katie Januszewska rewarded the faith from her coach with productive minutes from the bench, but Sevenoaks began to make their move as two-time finals MVP Monakana scored eight points in a row – capped by back-to-back threes to cut the gap to just four points.

The GB international hit a third triple shortly after with the Riders lead remaining at four points at 37-33 heading into the half-time break.

It was a game of runs in the third period as Leicester twice restored their double-digit cushion as the offence began to flow again as Oliver completed a double-double, while Winterburn continued to facilitate.

From a three-point game at 43-40, Leicester compiled a 13-3 spell which would prove pivotal in the contest with Sara Hinriksdottir closing the quarter to hand her side a favourable 60-46 cushion.

Monakana continued to increase her scoring output for the Suns – while rising star Asha Andrews also hit a three – but Robb helped the Riders keep their opponents at bay. Gaskin hit another big three out of a timeout just as Len Busch’s side again threatened having closed to within seven.

Despite their best efforts, the Suns would come up short in their first game since December as Leicester celebrated another title success having lifted their third WBBL Trophy in the final game of last season.

The result means there has been a different winner in each of the five editions of the Cup as Leicester join Sevenoaks, Manchester Mystics, Nottingham Wildcats and Sheffield Hatters on the roll of honour.