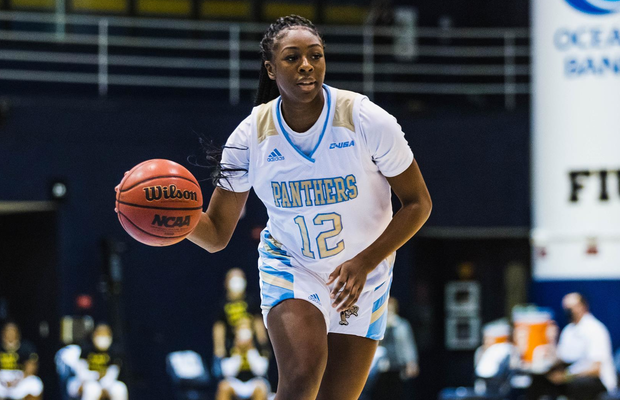 The New Year is here and the Brits are still flying the flag overseas with more standout displays in NCAA action during January.

Hannah Jump tasted defeat for the first time with Stanford (15-2) during January as the then number-1 ranked team slipped to successive losses. The sharpshooter hit 15 points all from downtown in the preceding encounter, and matched her season-high for a third time in the final game of a busy month with the team-high tally coming in a dominant win against Washington.

Kyla Nelson fired in a season-high of 25 points to start 2021 in style with Emerald Ekpiteta weighing in with 22 points to lead FIU (7-7) to victory. Nelson scored in double figures in all eight games during the month including a 21-point display at Marshall, while Ekpiteta recorded four double-doubles with a best of 19 points and 18 rebounds against Middle Tennessee.

Senior guard Khaleah Edwards scored nine points in back-to-back games before closing the month with a season’s best of 19 points to lead Wagner (5-2) to their fourth consecutive victory – with Edwards knocking down seven triples during the run.

Maya Hyacienth opened the New Year with a 17-point haul to continue her scoring touch, and went one better with 18 on a return to the starting lineup as Rider (5-14) beat Quinnipac 77-74 in overtime. A season-high of four triples were netted in each performance as Hyacienth has taken her scoring average from 2.9 points to 6.5 points per game in the space of a month.

Grace Heeps had a breakout game with 17 points – including 5-of-7 three-point shooting – for UAlbany (5-7) in a 63-50 success, in the middle of a three-game win streak. The sophomore guard also cut her turnovers down from 18 to just seven in the month of January in similar six-game stints.

Loren Christie remained a starter for Buffalo (9-5) – as part of a four-game stretch – and posted a season-high of nine points as well as nine rebounds and three blocks to start January with a win at Miami before contributing seven points and eight boards in her next outing.

Redshirt junior Gabby Nikitinaite made her debut for George Washington (4-11) in January and was soon inserted into the starting lineup. The former GB Under-20 guard/forward hit double figures for the first time with 10 points along with seven rebounds and three assists in a 20-point victory at George Mason.

Jenelle Grant started 2021 with seven points for Purdue (6-8) in a loss against #25 ranked Michigan State, while Milly Knowles had another run in the starting lineup early for Eastern Washington (6-9) and collected eight rebounds in a 21-point road win.

Shawnisay Millar is averaging 9.1 points per game at Midwestern State (7-3) having posted a season-high of 18 points to help spark a five-game win streak having also netted 11 points twice during the month. Fellow Scot, Alix Henderson set season-highs of 15 points and four assists for Point Loma (4-1) having netted 12 points from the bench earlier in the month.

Jessica Eadsforth-Yates recorded eight points, five rebounds and six assists in her second start of the season to help Davis & Elkins (1-7) to their first win before hitting double figures for the first time with a best of 12 points later in the month.

Junior guard Charlotte Ellmore had a busy month with West Florida (4-5), logging heavy minutes in January with a scoring best of 14 points coming in a five-point road triumph. The former WEABL MVP is averaging 10.2 points along with 3.4 assist and 1.3 steals so far this season.

Sadie Russell closed out January with a spell of three consecutive games with at least 10 points with the senior forward putting up 13 points, six rebounds and three steals in 38 minutes of a five-point defeat for Flagler (3-5).

Junior Dami Adeyinka made the most of her first start of the season with Quincy (1-12); opening 2021 with season-highs of 10 points and eight rebounds, before handing out six assists in each of the next two games. Fellow junior, Megan Sheret collected a total of 15 rebounds – including a season-high of eight – during back-to-back wins for Fresno Pacific (2-2) over Dominican.

Hannah Dawson set her season’s best with nine points, all from downtown, for Texas A&M International (8-3) as their win streak came to an end. Meanwhile, Jade Mbam has been an immediate starter for Angelo State (1-6) and began her freshman season with a best of seven points along with six rebounds in a 10-point loss.