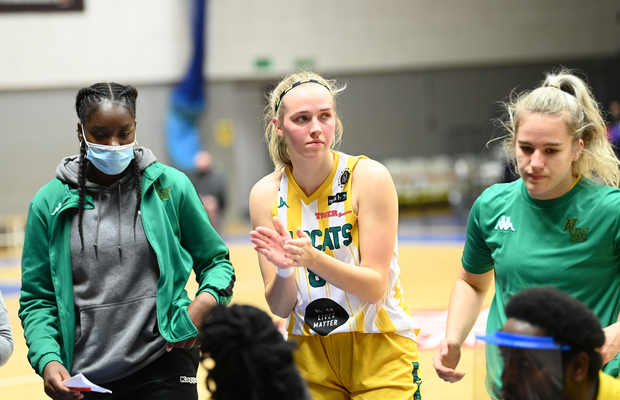 It’s semi-finals weekend in the WBBL Cup as four teams battle it out to edge closer to the first piece of silverware on offer for the 2020-21 season.

Sevenoaks Suns and Leicester Riders have dominated recent history in the title stakes with eight of the last nine trophies won by either side, while Nottingham Wildcats and Cardiff Met Archers will be out to shake things up on Saturday.

Sevenoaks are the defending champions after lifting the title for the first time back in January and are chasing a third consecutive final appearance, having lost the 2019 finale. Nottingham are also former champions as they ended their finals heartbreak with a triumph in 2018 with victory against Caledonia Pride.

How they got here:

The Suns got the job done on the road as they battled past BA London Lions and Cardiff with a 20-0 forfeited win in between as they wrapped up top spot in the South. Having retained their core of recent successful sides, Sevenoaks have continued their winning ways and will look to keep building their momentum.

As for Nottingham, they battled past Newcastle Eagles for an opening win before a tough loss away at the Riders. Jasmine Joyner and Chelsey Shumpert then combined for 66 points in two incredible stat-lines as they helped lead their side past Manchester Met Mystics on the road, to advance.

There’s no doubt the weekly focus on the Wildcats will be on Joyner and Shumpert, but they have a deeper roster this year with a supporting cast that will need to play a vital role. The Wildcats have been without Siobhan Prior so far, but still have an abundance of talent including the returning Simone Costa and Tia Freeman alongside an exciting crop of junior GB internationals.

Sevenoaks pride themselves on their defence and will take heart from seeing how the Riders coped with the Wildcats’ threat as both Joyner and Shumpert struggled; consistently being forced into taking tough shots. On the other end of the floor, the Suns have been guided by their GB internationals with Renee Busch and Janice Monakana both making a strong start to the season as they help stretch the floor.

Len Busch’s side have a phenomenal record in recent years and have experience on their side, but the Wildcats won’t mind coming in as underdogs and trying to get back to another final after a lean spell.

What the players say:

“Keys to success for us is to control what we can control which will be our defence and the energy we bring to the game, if it’s from the bench to the people on the court we all have to be locked in. We have many weapons offensively and a deep bench and I think that’s what usually sets us apart that you can’t just stop one or two people you have to be prepared to guard everyone.

“I think playing to our strengths and what has worked for us in the past is what we continue to do and it’s been working for us so far.”

“I’m really looking forward to this semi-final and playing against Sevenoaks. I think we match up really good against them and it should be a really interesting game, following the last time we played them. We’ve got more depth in our team this year and feel as though we’re ready to compete and make it into a final this year.

“I believe the big keys will be for us to push the ball in transition, we really like getting out on the break as a team and have a lot of different options. We also have to make sure we stay composed for the full 40 minutes as Sevenoaks have a lot of experience in their team.”

This is the fifth edition of the WBBL Cup and the fourth time that Leicester have made the semi-finals stage, but they are yet to go any further. In contrast, Cardiff will competing in the final four for the first time, in any WBBL competition.

How they got here:

Leicester have been the most impressive side so far this season as they brushed off the challenge of a tough group in the North with three convincing victories. The defence has led the way, conceding just 55.0 points per game across the three games as they stifled the threats of Manchester Met Mystics, Nottingham and Newcastle Eagles.

The Archers’ route comes in unusual fashion having not picked up a win on court as the 20-0 forfeited victory over Oaklands Wolves proved decisive in topping the three-way tie for second. Two home defeats against BA London Lions and Sevenoaks last weekend, though there were positives to take from the contests.

One of the key factors for the Archers will be limiting Holly Winterburn’s influence on the game with the 20-year-old guard averaging 14.7 points, 11.0 rebounds and 6.7 assists per game in the group phase. Leicester struggled at times with their shooting, but have an array of options at their disposal and proved their threat with the fourth quarter onslaught last weekend.

Cardiff need to find a way of scoring having been held to the low 50s in their double-header last weekend having been without last season’s top scorer, Cristina Bigica. They know that points will be hard to come by against an organised and ruthless defence.

Riders’ interior defence, in particular, consisting of Christina Gaskin, Ella Clark & Kate Oliver in rotation has been a focal point of their success, so the Archers may look to prosper from the perimeter with new signing Shannon Hatch one of the players that can potentially make a difference.

What the players say:

“It’s really exciting to be playing for a spot in the cup final. The key for us will be to execute defensively so we can push the pace of the game. We’ve prepared hard this week and are ready to battle for 40 minutes.

“We’ve had a strong start to the season coming out top of a tough cup group and are happy with how we have performed. We have been very focused defensively which has been key for us and has allowed us to play at a high tempo, which we enjoy. We are a deep team and we have threats from multiple positions and have played well together as a team to use that to our advantage.”

“We are really excited for the semi final this weekend. Every basketball game is a privilege at the moment and Leicester are a top level team. They play really aggressive defence so we need to take care of the ball, avoid turnovers and limit their transition points. It’ll definitely be a great test for us.”

Both games are set to be streamed LIVE on the WBBL’s YouTube channel.