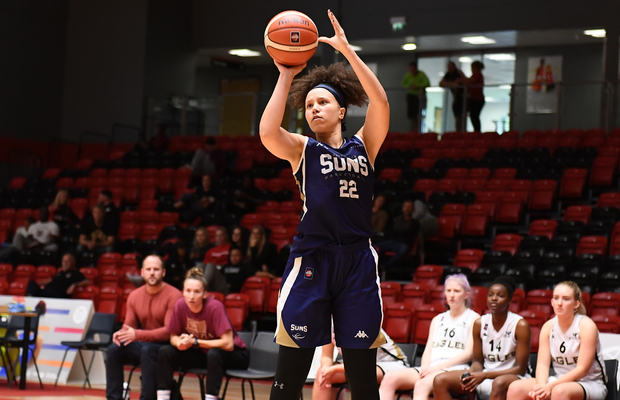 Since the WBBL began in the 2014-15 season, eight players have passed the 1000-point barrier in league games only.

We run through those members of the 1000-point club in the WBBL Championship and also look at the players who round out the overall top 10 leading scorers list:

The most prolific scorer in league history. Harris’ total was accumulated in just 50 games during a dominant three-year span with Nottingham Wildcats.

The American made an immediate impact in the 2015-16 campaign and would earn league MVP honours in her second season after averaging an impressive 25.3 points, 11.6 rebounds and 2.4 assists per game during the regular season.

Harris made the All-WBBL Team of the Year in each of her three seasons with the Wildcats and had a best of 39 points in 2017 against Barking Abbey.

Another lights out scorer, Gorrell is second only to Harris in career points per game averages in the WBBL Championship.

The American has a chance to move up the all-time points leaderboard upon her return to the North-East having starred in her first spell at the club.

Gorrell scored 300+ points in each of her two years at Team Northumbria before making the switch to Sheffield Hatters, where she averaged 19.8 points in the 2018-19 season – making the All-WBBL Team of the Year for the second successive year.

The Scottish international has been a consistent scorer throughout her time in the WBBL. Hayward spent four years at Leicester Riders before moving further north to join Durham Palatinates, where she’d go on to pass the 1000-point barrier.

Hayward made the All-WBBL British Team of the Year in her penultimate season with the Riders after putting up 15.2 points during the 2017-18 campaign.

Despite only starting four of 12 league appearances in the curtailed season with Durham, Hayward was on course for a best scoring season with 15.4 points per game including a best of 24 points in what turned out to be their final game of 2019-20.

The Michigan native represented GB at EuroBasket Women 2015 having swept her way to the MVP award in the inaugural WBBL season. Gandy put up over 350 points for Sheffield Hatters and would spend the first four years with the Yorkshire club.

Gandy made the first three editions of the All-WBBL British Team of the Year with consistent performances at both ends helping the Hatters continue their success.

Last season was the first time Gandy – now 38 – had not suited up in the league having spent the previous year with Team Northumbria to add to her points tally with 10.3 points per outing in a predominant role off the bench.

The Hungarian has played in every league season – to date – in the WBBL and really exploded into life in terms of scoring output between 2015-17 with Cardiff Met Archers.

Fritz continued to improve upon her points averages and amassed a combined 600+ points over her second and third seasons with the Welsh franchise before earning a move to Sevenoaks Suns.

No longer having to be the go-to scorer with the Suns, Fritz still played an important role for her new side and helped the club to multiple titles in her three-year spell, although she has not returned for the upcoming season.

Another former GB Senior international, Naylor’s WBBL career will be most remembered for the incredible game-winner to hand Sheffield Hatters the Cup title in 2018.

Naylor is one of three players to put up 1500+ points in the WBBL Championship having made 94 appearances all for the Hatters in the first six years of the league.

In Sheffield’s first-ever league game, Naylor set the tone with a 30-point haul and formed a dominant partnership with Gandy during the Hatters for several years in the WBBL. While the Hatters are taking a forced year out, hopefully it won’t be long before Naylor is back on the court.

The GB Senior guard is getting ready for her seventh season in the WBBL and the all-time league leader in assists made a move into second spot on the scoring charts earlier this year.

Jones started at Leicester Riders before making the move to hometown Manchester Met Mystics after two seasons and is one of just three players to have played in over a century of league games.

It’s no surprise to see supreme scorer Cat Carr at the top of the pile, but the Sevenoaks Suns star does so much more in her crucial role on the team.

The American has been ever-present in the WBBL with Sevenoaks and been integral to the club’s rise from bottom of the league to the most successful side in history with her best scoring season coming in 2014-15 with an average of 20+ points per outing.

Carr put up 16.3 points per game in the shortened 2019-20 season; still proving to be one of the most consistent scorers in the league amongst her all-round game and will be key for the Suns yet again this season as she tracks down the 2000-point milestone.

Sarah Wagstaff just needs a trio of triples, being nine points away from being member number nine of the WBBL’s 1000-point club. The veteran has the chance to do so having signed up for yet another year with Cardiff Met Archers, whilst continuing junior coaching duties.

Siobhan Prior has signed up for another year at Nottingham Wildcats and is 10th on the all-time scoring list in the WBBL – 43 points shy of hitting the four-figure milestone.