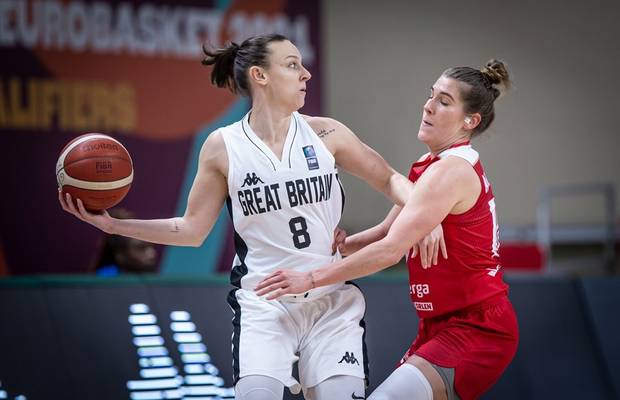 Great Britain’s Senior Women returned to action with a 77-49 victory over Poland as their Women’s EuroBasket 2021 qualifiers campaign resumed.

Chema Buceta’s side improve to 2-1 in the group with their final game against Belarus scheduled for February – likely to take place in another ‘bubble’ – as their defence stepped up once again, even in the absence of key starters.

Chantelle Handy led the offence with 19 points – including 15 all from downtown in the first half – with Eilidh Simpson adding 12 points, nine rebounds and four assists.

GB immediately went to work inside, but found little success and it would take a three from Handy to break a three-minute drought. Both sides struggled to find their offensive rhythm early, though Poland were able to forge ahead – thanks to a 7-0 run – to lead 10-15.

It was another Handy three to get GB going at the start of the second and it was just a two-point game when her third triple dropped. Janice Monkana followed suit before Handy hit two more from beyond the arc to give GB their first lead of the game.

Simpson joined the three-point party to continue the momentum with back-to-back triples extending the advantage into double figures at 33-23 as part of a 17-3 burst. GB hit 8-of-18 from 3-point range in the first half as they took a 37-28 lead into the break with their opponents 2-of-14.

GB got going inside early in the second half, but more importantly continued to keep Poland at bay at the other end. Renee Busch marked her return with a three at the buzzer at the second attempt to make it a 16-point game at 48-32.

Poland battled back with a 9-0 run to close the gap, but GB finished strong to lead 53-41 with 10 minutes remaining as the physical tussle continued.

The defensive battle was still being won by GB, while Fagbenle moved into double figures to re-establish a 16-point lead at the midpoint of the final quarter and would run out convincing winners.