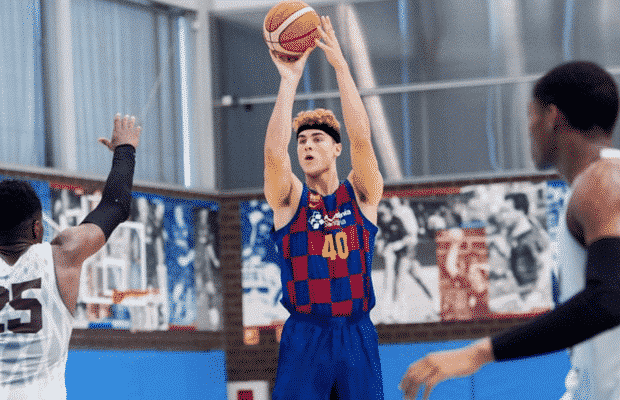 Matt Marsh has joined one of the leading clubs in France with ASVEL announcing a two-year deal for the 18-year-old.

The promising GB junior had spent the last couple of years in Spain with FC Barcelona following his move from Reading Rockets.

“I decided to sign with Asvel as they are a very established team with incredible staff and facilities,” Marsh told Hoopsfix. “Alongside that, they also showed huge interest in me and my potential and have offered the opportunity to be training/playing Euroleague basketball.

“They haven’t spoken too much about my specific role as it is early days however they have expressed that they’re dedicated to bringing my game to the next level and developing my skill set as a more versatile 4 and getting as much experience as possible.”

He said minutes “aren’t guaranteed” but his contract states he is part of the Euroleague roster as a development player and believes he has an opportunity to play.

Marsh was also previously selected to participate at the FIBA Basketball Without Borders Europe Camp in 2019 and recently averaged 6.8 points per game at the adidas Next Generation Tournament, where he came up against his new side.

Looking back on his time with Barcelona he reflected:

“Barcelona was a huge step for me, it allowed me to establish myself as a player and introduce me to the world of professional basketball. Though I experienced a lot of ups and downs during my two years there I have learnt and experienced so much that I will take with me as I progress.”

Lyon, who have French NBA legend Tony Parker as club president, also revealed that Marsh would have his chance to be integrated into the professional group.

“We have been following Matthew for some time now, notably with Nicolas Mathieu, and it is with great pleasure that we will welcome him at the start of the school year,” said U21 coach Anthony Brossard.

“He will benefit from the infrastructure of the Tony Parker Adequat Academy, and will continue his basketball training with the Espoirs. The objective is that he can have the opportunity to play his first minutes [as a] pro.”

ASVEL had a 21-4 record in Pro-A last season before the season’s cancellation and also made their return to compete in EuroLeague.