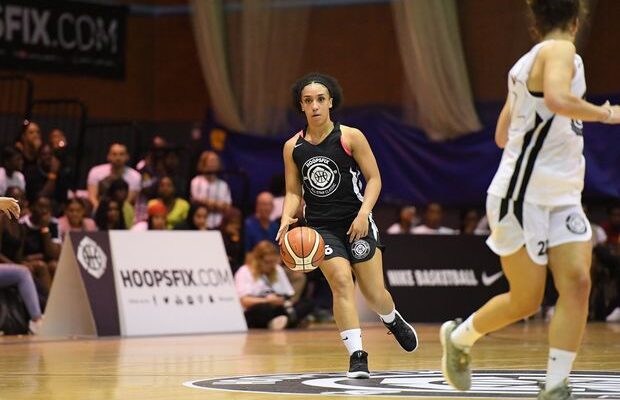 Great Britain Under-18 guard Jade Mbam is heading to NCAA Division 1 next season after signing with UC Riverside.

The 2002-born prospect has had another strong year in the WEABL, receiving All-Northern Conference first team honours after averaging 14.3 points, 7.9 rebounds and 5.9 assists per game for Manchester Mystics Academy.

And, Mbam revealed the reasons behind her decision to Hoopsfix as well as what she hopes to learn from the experience upon arriving in California.

“It feels great to finally commit to UCR,” began Mbam. “It’s honestly a dream come true to get a full-ride scholarship to play at the D1 level in the US at a school that is right for me.

“I think the key thing for me in making my decision was the family atmosphere that I felt on my visit, which is a big thing because obviously I’ll be so far away from home.

“Whilst I’m over there I’m really looking to adapt to the different style of play, push myself to all my limits on the court and take the next steps in my game. Off the court, I’m hoping to become a better person, with new life skills and a new outlook on life.

“Personally, one of the best things about my commitment is that a lot of people didn’t expect it. I stayed at home in Manchester when it was starting to grow the academy and I think it just highlights the message that no matter where you are, with trust in the people around you and LOTS of hard work, you can reach your goal.”

Mbam was part of the first-ever Under-19 Women’s game at the 2019 Hoopsfix All-Star Classic before averaging 5.3 points per game for GB Under-18s at the European Championships with a best of 15 points coming against Albania.