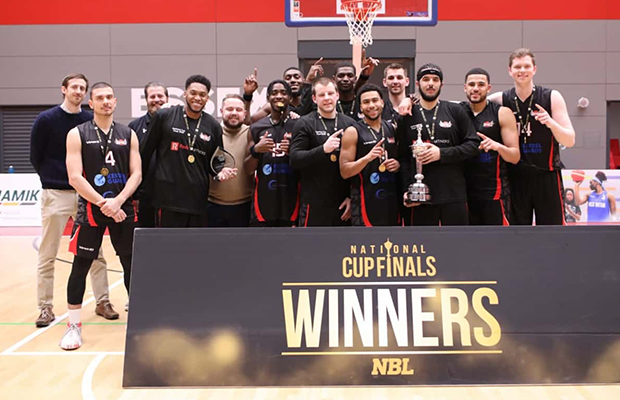 Team Solent Kestrels continued their undefeated season with a comfortable 90-67 victory over Reading Rockets to claim the 2020 National Cup title on Sunday afternoon in Essex.

It marked the first time the club has won the National Cup, despite making the final for the third time in four years (being stunned by Loughborough in 2019 and suffering a defeat to Northumbria in 2017), and Head Coach Matt Guymon admitted it feels great to get the monkey off their back.

“This is our third (final) in the last 4 years,” Solent Kestrels Head Coach Matt Guymon commented. “We’ve been beaten convincingly in those other finals, so we wanted to get this one, it’s the only bit of silverware that has eluded us, so it’s a great feeling to finally secure it.”

“We knew what their strengths were gonna be, we stuck to the game plan mostly for the whole thing,” Okoronkwo said. “It was a real team effort, it was a game of runs. IT was good to come away with our first of hopefully many trophies this year.”

“It was a great game. We’ve prepped all week for Reading, they were missing some key personnel which meant other players had to step up for them; even when we went up 15-2, a number of players kept them in the game. I thought it was a great game all around.

“I don’t have to say anything to these guys (to stop them from being complacent), they’re such a mature group, they hold each other accountable and maintain standards. They’re striving for every bit of silverware.

Kestrels remain unbeaten in the league (15-0) and are in the semi-finals of the BBL Trophy – the first ever NBL club to do so.

Nick Richards led the way for the Rockets with a game-high 22 points, plus 8 rebounds and 5 assists, whilst Ed Potter had a 16-point, 13-rebound double-double, but they were unable to overcome Solent, who led from start to finish after going up early.