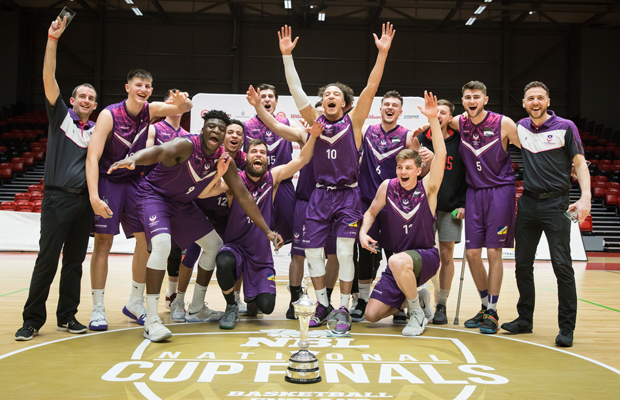 Loughborough rode an MVP performance from Lucien Cristofis to a 82-63 victory over Team Solent Kestrels in claiming the 2019 National Cup on Sunday at Essex Sport Arena.

Cristofis had 17 of his 24 points in the third period, where Riders were able to build a fifteen point cushion that would allow them to cruise the rest of the way. The 6’3″ guard finished 5-of-8 from three point range and added 6 rebounds and 2 assists.

He had a personal run of 10 straight points for Loughborough in the third period, where they used a 16-0 run to take a commanding lead in the contest after a nip and tuck first half.

“Words can’t describe it, it’s such an amazing achievement for us as a young group,” Cristofis told Hoopsfix after the game.

Kyle Jimenez added 14 points for Loughborough, Niall Harris and Hosana Kitenge both had double-doubles with 10 points, and 10 and 12 rebounds respectively, and Alex Roberts joined them in double figures with 10 points of his own, along with 9 rebounds.

“It was fun,” Loughborough Head Coach Mark Jarram commented. “It was back and forth, we knew it was going to be tough coming in, Solent are a very talented team with a ton of scoring. The key to game was at the defensive end and we held them to 63 points. We knew certain guys were going to get theirs but we just wanted to limit people below their averages.

“What these guys achieve being full time students is incredible, the dedication they give every single day is really cool. You can see they’re a good group, they’re together all the time and it was nice to get back on track, it was a big win.”

Solent were led by Travis Charles’ 24 points and 8 rebounds, but Herm Senor II was the only other player in double figures with 12 points, 6 rebounds and 6 steals, as they were held to just 28% shooting, including 2-of-22 from three point range.

Frustration boiled over for Nick Lewis, who finished with 8 points on 4-of-15 shooting, as he was ejected in the fourth quarter for jawing at the refs.

“Credit to Loughborough, they came in with a clear game plan to take our key guys out of rhythm, which they did,” Kestrels Head Coach Matt Guymon said.

“We we able to keep it close until the third, but when they started hitting from outside it blew the game open and we just didn’t have the character today to keep ourselves in the game.”