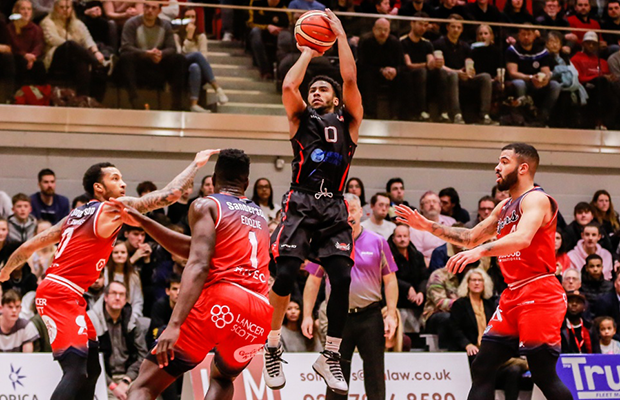 Solent Kestrels’ winning streak of almost a full calendar year finally came to an end on Sunday but the result became insignificant as their place in the BBL Trophy final was confirmed, with a 176-159 aggregate victory to become the first NBL club to make the BBL Trophy Final.

After shocking the Bristol Flyers with a 103-67 win in the first leg of the semi final, it was simply a case of avoiding defeat by more than 36, and although Sunday’s game did end up in a 92-73 defeat – ending a 37-game winning streak, it mattered little as Head Coach Matt Guymon’s side booked their spot in Glasgow on Sunday 15 March.

“It’s obviously disappointing to lose any game of basketball,” Guymon said after the game.

“There were some positive spells for us, however we did have a number of uncharacteristic lapses which ultimately cost us the chance to win the ball game on Sunday.

“That said it’s bitter sweet because we now make history in progressing to another showcase final for the club and full credit to our guys who were able ensure over two legs we did enough to move on.”

Despite losing Luke Busumbru to a broken foot in warm-ups in Leg 1 of the Semi-Finals, Ian Smith picked up the slack with a 29 point outing, along with 5 rebounds and 5 assists as he went 10-of-12 from the floor, ably backed up by 18 points from Chris Scarlett who caught fire in the second half and new signing TrayVonn Wright’s 14 – brought in specifically for the Trophy run.

Ian Smith is COOKING with 23 points on 8/8 shooting so far in the first half for @SolentKestrels in their @BBLofficial Trophy match-up with Bristol – including this anklebreaker! 🔥 #Hoopsfix #BritishBasketball pic.twitter.com/8hk5oQN6Iz

Kestrels guard Brendan Okoronkwo, added: “It was an unusual feeling to celebrate after a loss, but our approach and execution at both ends in the first leg helped us win the tie overall.

“It was a great feeling to win that first leg and applaud our fans that packed out the Solent Sports Complex. It was a moment that we as a team will remember.”

In the second leg, Elliott Sentance led Solent with 17, Ian Smith and 16 and TrayVonn Wright 13.

Solent now await one of Newcastle Eagles or Cheshire Phoenix for their final match-up with Newcastle leading 88-79 going into the second leg at the Eagles Community Arena on March 1.