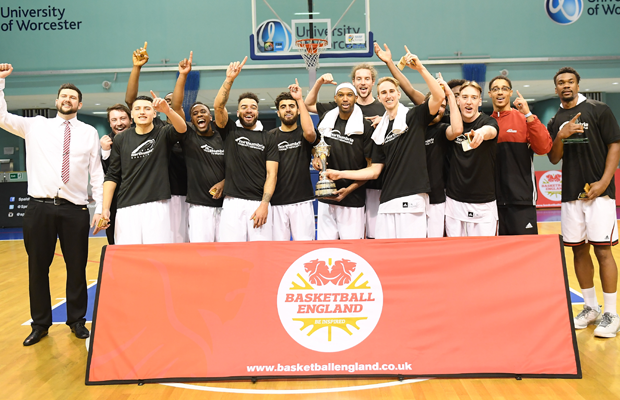 Team Northumbria picked up the 2017 National Cup after a 73-56 win over Team Solent Kestrels on Sunday afternoon in Worcester.

American Malcolm Smith was dominant on his way to MVP honours, going 7 of 10 from the floor for a 32 point, 15 rebound double double, as Solent had no answers for the big man in what was a tough day for the club after the women suffered a heavy loss in the female competition prior.

Blayne Freckleton finished with 17 points, 5 rebounds and 3 assists off the bench, including 8 in a key stretch across the third and fourth quarter when Kestrels were attempting to mount a comeback, to put Northumbria back up sixteen.

“(It was) Scrappy, a typical final I guess,” said Northumbria Head Coach Marc Steutel before he got drenched by his players in the celebrations.

“We like making basketball games scrappy, people know that, that’s our style. To hold them to 56, they’ve been averaging 81, shows defensively how keyed in we were.

“We could have been better offensively, but I’ll let the guys enjoy it I suppose! I’m pleased that defensively we were able to execute what we set out to execute.

Meanwhile, MVP Smith, a new addition this season, was elated with the win:

“It feels great. I’ve been a new addition so I just wanted to come in and help these guys reach the goals they had set for themselves. They took me in with open arms so I’m just glad to see everyone happy. It’s something they’ve been working for for a while so I’m glad we reached the goal that everybody wanted, it’s a great feeling, hard to put into words, I’m just happy.

“I’ve gotta credit my teammates,” he said of his MVP performance. “They gave me the ball in positions that I liked to score in. I was playing hard trying to get offensive rebounds, if you play hard that takes care most of your problems on offence so that’s what I try to do.”

The two teams matched each other blow for blow in the opening period, Solent keeping pace behind an 11 point quarter from Jorge Ebanks, as they were tied at 13 heading into the second.

There, Northumbria stamped their authority on the game, holding Ebanks scoreless as he went 0 for 3, and dominating the period 22-7, culminating in a buzzer beater by Smith at the halftime break to lead by fifteen.

Solent’s Marquis Mathis, who has had a dominant season so far, struggled to get going, and despite a brief flash in the third where the Kestrels managed to get the lead back down to 8, it would not be enough as Northumbria ran out winners.

Ebanks finished with 18 to lead Solent, whilst Mathis had 11 points and 8 rebounds.

You can watch a full replay of the game on Facebook.