Ipswich hold off Reading for U18 Women’s National Cup title 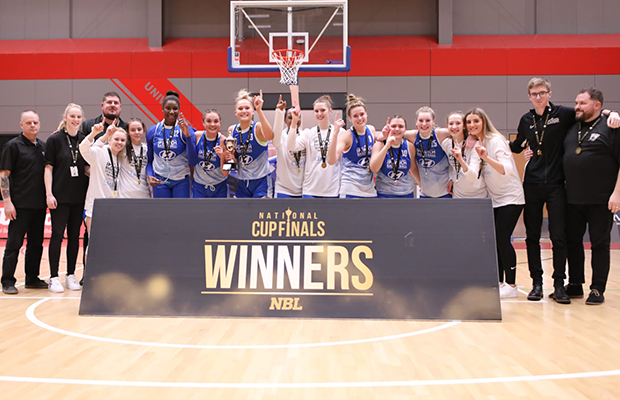 Ipswich prevented Reading from defending their title with a 60-57 win to claim the 2020 Under-19 Women’s National Cup.

Having led the majority of the game, Ipswich almost threw it away as Reading tied it up heading into the final two and a half minutes, but 4 points from from eventual MVP Susannah Rafiu down the stretch and key free throws saw Ipswich come away with the victory.

“Stressful!” Ipswich Head Coach Nick Drane exclaimed after the game. “I think in a final as long as you win you’ve had a good day at the office.

“I think our girls were incredibly disciplined in terms of executing some of the very simple things that we set out we need to do. Reading are a really good team, we had to be really disciplined today.”

Rafiu finished with 15 points, 7 rebounds, 2 assists and 5 blocks, whilst Ipswich captain Esther Little had a 15-point, 13-rebound double-double and Cameron Taylor-Willis finished with 11 points and 13 rebounds.

“I thought it was a good game,” Rafiu added. “We’re a good team, we all love each other and work hard so it was fine, made it easier to get through.”

Sitota Gines led Reading with 21 points before fouling out, and Anabel Lattore had 12 points ad 12 rebounds.