Dan Clark: "A day to be very proud of for British basketball" - Hoopsfix.com

Support
Home / National Teams / Dan Clark: “A day to be very proud of for British basketball”

Dan Clark: “A day to be very proud of for British basketball” 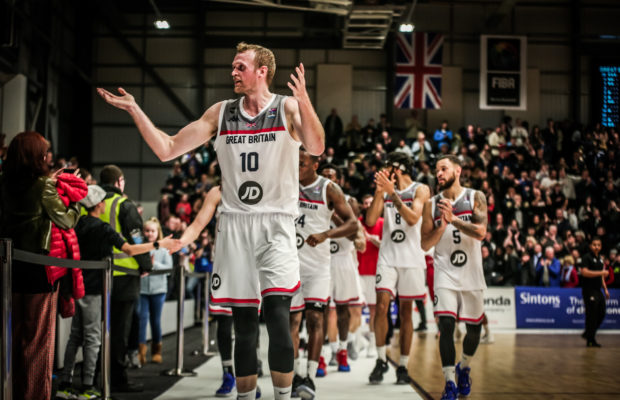 Clark scored six points off the bench in 17 minutes with several important contributions throughout the roster as GB bounced back from their opening loss to win 81-73 in Newcastle.

“We were disappointed after the Montenegro game as we felt that was a winnable game,” Clark admitted. “It’s not easy to play two games in three/four days so hats off to all the guys especially guys like Sacha (Killeya-Jones) and Ben (Mockford) who have not been around for a little while.”

Luke Nelson starred with a 26-point haul including 18 points in the first half in an impressive shooting display. The 24-year-old capped a fantastic performance with the dagger triple just ahead of the final minute to give GB a commanding nine-point lead.

“Luke had a huge game – guys really stepped up when we need them and it was a great performance in general,” said Clark.

“We all know the talent Luke has and his potential. We’ve been waiting for one of these games for a while now.

“He’s more than capable, a great offensive player and he’s learning his role, progressing well and hopefully builds on this to become a more consistent spark.”

GB had trailed by as many as eight points midway through the third quarter and still trailed 64-68 inside the final period. However, key plays at both ends of the floor set the tone down the stretch to help pull off an important win.

Clark referred to previous struggles of not closing out victories in the decisive moments, but insisted the squad deserved a lot of credit for their performance.

“I think we should give ourselves a pat on the back,” he said. “As GB, we always win thanks to someone else or we do something good because of someone else.

“We deserved the win – we did right things at end of the game and they didn’t. That doesn’t happen often, honestly in recently history, we haven’t done that.

“The guys in the locker room deserve a pat on the back, a well done and to enjoy this moment.”

GB are next in action with a home double-header in the November window as they host France and Montenegro before completing their campaign with trips to France and Germany in 12 months’ time.