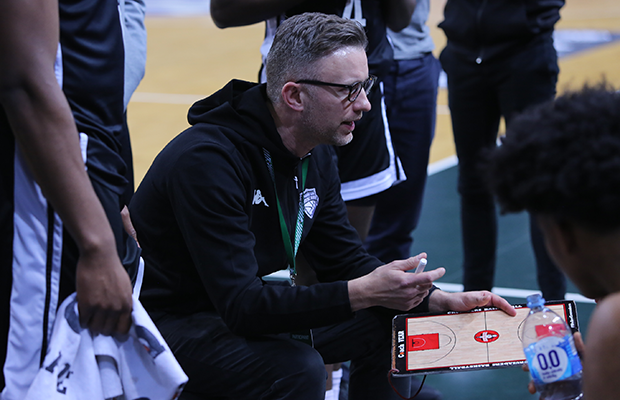 Barking Abbey were grounded with two consecutive defeats on Saturday, after their stunning opening day at the Euroleague adidas Next Generation Tournament.

After their shock upset over Joventut Badalona on Friday, BA were unable to build momentum with the with, crashing down to earth with a heavy 89-37 defeat at the hands of Rytas Vilnius first thing this morning, before giving up a solid first half lead to be downed 99-84 by Fenerbahce this evening.

It means they fall to 1-2 in the tournament, dropping into the lower place classification bracket to play for sixth place tomorrow.

Against Rytas, after a competitive first quarter things quickly went south, with BA being held to single digits in the remaining three periods and never able to get into the game, outmatched in every facet of the contest. Cameron Hildreth was the only player to reach double figures with 12 points, with Veron Eze adding 7.

Against Fenerbahce, a strong first half led by another outstanding performance from Hildreth – who had 22 points across the first two periods – saw BA take a 10 point lead, 54-44 into the break. However, Fenerbahce used a 21-4 run over the final five minutes of the third to take control, catching fire from outside as they finished the game with 15 three-pointers.

Cameron Hildreth put on another show to finish with 35 points, 10 rebounds, 6 assists and 4 steals, Veron Eze had 13 points, whilst Edrick Okunola and Giovanni Emejuru added 7 each.

“It felt like the morning game brought us back down to earth,” Head Coach James Vear said reflecting on the day’s games.

“It was a very early game, mentally and physically we were tired and Rytas punished us on both ends on the floor. I asked the players for a reaction in the second game, and I thought they did that. We played a lot better, more of our game rather than their style of basketball but unfortunately the third quarter really hurt us after some mental lapses made it hard for us to come back.”

Adding his thoughts on the level of competition in the tournament, he commented: