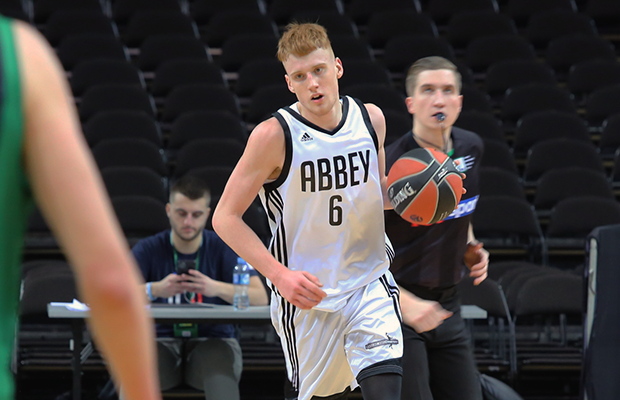 Cameron Hildreth cemented his status amongst the elite of his generation as he led Barking Abbey to a 70-67 upset over Spanish side Joventut Badalona in their Euroleague adidas Next Generation Tournament opener on Friday afternoon in Kaunas, Lithuania.

BA open up the @Euroleague #adidasNGT with a stunning victory over Joventut Badalona!

Hildreth exploded for 35 points, including the game winner, going 10-of-20 from the field, 12-of-15 at the line, along with 5 rebounds, and 7 steals as BA fought from 13 points down to steal victory from the jaws of defeat, as the East London academy upset the tournament favourites in the opener.

Leading by as many as 12 in the first half, Joventut dominated the glass, hauling in 24 offensive rebounds in the game, using their size advantage at every position. But BA refused to give in, keeping the game within striking distance throughout turning over a 5 point deficit in the last 4 minutes.

Hildreth had 7 points in the last 37 seconds, getting fouled on a 3-pointer and sinking all three free throws to pull BA within one, then after Joventut were called for an offensive foul on a screen, the Worthing Thunder guard euro-stepped his way into the lane for tough finish to give BA the lead.

But he wasn’t done. Needing a stop at the other end out of a time out, Hildreth came up with a steal before sealing the game at the line.

“It feels awesome to come here as underdogs, with them the favourites to win, to get the win was awesome,” Hildreth said.
“Our nerves kicked in at the beginning when we were making little mistakes but we managed to get rid of those nerves quickly and start playing well.”

Flynn Boardman-Raffet added 8 points for BA, whilst Giovanni Emejuru added 7 and Veron Eze had 11 rebounds with his 6 points.

“The guys were incredible today. The new guys who have come in, they haven’t been with us very long, bought into the concepts and the way that we want to play.

“It was quite obvious from watching that Cam Hildreth was incredible today but there were a lot of players who put in huge performances for us to get a win. I think we led for a total of 3 minutes in that game, but the guys never gave up, kept fighting and I think we deserved the win at the end there.”

Barking Abbey return to action tomorrow with two games, 7am against Rytas Vilnius and then 3:15pm against Fenerbahce. Both games will be live on YouTube.