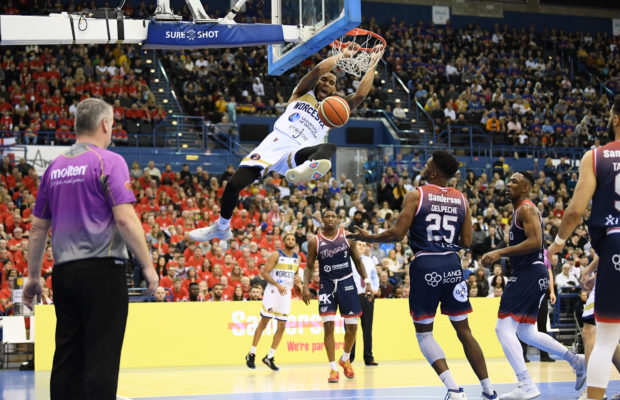 The first piece of silverware of the 2019-20 season has been claimed as the BBL Cup final took centre stage in the latest week of action.

Worcester Wolves jump up the rankings following their first Cup title, while Bristol Flyers drop a place to lose top spot after coming up short of a historic triumph for the club.

The Lions take top spot for the first time following Bristol’s defeat in Sunday’s Cup final. Four straight league wins since their Trophy exit, at the hands of Solent Kestrels, have put the capital side in a strong position at the top. Two big challenges are up next on the road with a trip to Leicester on Friday before visiting Newcastle next week.

The Flyers never led in their first-ever appearance in a BBL final as they were overcome in a defensive battle against Worcester. Bright spells were never expanded on as they closed to within striking distance on numerous occasions, particularly in a tense fourth quarter before suffering an eight-point defeat.

Gentrey Thomas top scored with 13 points in the loss with the offence stifled throughout, and the Flyers must put the result behind them as they return to league action with a home encounter with Cheshire as they aim to climb from the bottom half of the standings.

Fred Thomas comes up with the huge block at the rim for @BristolFlyers in the @BBLofficial Cup Final! ⛔️ #BritishBasketball

The Rocks put their Trophy loss behind them with a convincing 102-81 victory over Surrey in the only league game to take place last weekend. Greg Pryor poured in 29 points with Ali Fraser adding 16 points, 10 rebounds and five assists as Glasgow moved to 6-2 behind the Lions.

Their home stretch continues with Plymouth heading to the Emirates Arena on Friday with the Rocks 3-2 in the current span that includes three in a row in the league with Bristol also visiting next week.

Worcester ended a near six-year wait for silverware as they claimed the BBL Cup title for the first time with a 67-59 success against Bristol in front of a record crowd in Birmingham. Amir Williams was the standout performer with 23 points, 13 rebounds and five blocks as the MVP to lead the Wolves to victory.

It was a deserved success for Matt Newby on his birthday, marking his return to the BBL in style and they must quickly turn their focus back to the league as they welcome Newcastle on Friday night with the chance to draw level with their opponents.

Leicester were another side not in action last weekend as they prepare for a crunch clash against the league-leading Lions with a sellout crowd at the Morningside Arena. The Riders have played the fewest league games of anyone in the league, half as many as some teams, and will not want to be playing significant catchup in the wins column.

Cheshire were probably most in need of the weekend off following their exploits to win the Trophy quarter-final last time out. Pharroh Gordon has been added to the squad to provide depth following some key injuries and the Phoenix are on the road against Bristol on Saturday – currently in a tie for fourth spot with Worcester.

Newcastle, officially, became the first team to 13 wins this season as they advanced to the semi-finals of the Trophy with an 86-79 win over Sheffield. Having already suffered some big defeats against the Sharks, it was a welcome result with a 30-point haul from Rahmon Fletcher leading the way, while CJ Gettys had another big double-double.

The Eagles have won four of their last five in all competitions with their only blip coming at home to Cheshire, who they will meet in the last four of the Trophy. They visit Cup champs Worcester on Friday as they look to build on a strong start to their league campaign as they currently sit in third.

The Sharks fell to their third loss in a row in what has been a tough run of fixtures. Connor Cashaw had 24 points in the seven-point Trophy defeat as they fell at the quarter-final stage for the second time this season.

Following losses to Glasgow and London, Sheffield now have somewhat of a more ‘favourable’ upcoming schedule starting with a double-header this weekend. They host Surrey on Friday before facing Cheshire on the road as they currently sit two wins adrift of both teams.

The Scorchers are still proving to be a difficult team to figure out. New additions certainly made an impact, but as good as they have been at home, the struggles on the road are also evident and that continued last week with a 102-81 defeat in Glasgow to drop to .500.

Devontavius Payne scored 27 points against the team he had originally signed for in the summer, but Surrey quickly found themselves in a 35-13 hole and never recovered. However, on Thursday they announced the signing of Matthew Bryan-Amaning in a move that could have a huge impact – a player with a significant inside presence as well as an impressive track record when it comes to winning. A possible debut awaits on Friday at Sheffield.

Scorchers are delighted to announce the signing of Matthew Bryan-Amaning! 🔥@MBALIVE11 joins Creon's team as we continue our push for the BBL play-offs!

One weekend off becomes two (and likely, three) for the Giants as they have a chance for their players to return to close to full fitness ahead of their next scheduled game against Sheffield on 16th February. Danny Byrne confirmed that Jack Hudson had returned to training with initial fears of a season-ending injury.

Plymouth have been some moves since their weekend break having swooped in to acquire the services of Will Neighbour for his second spell with the club. The addition has seen the departure of American duo Sam Daniel and Tyrell Johnson, who had scored a season-high 22 points in their last appearance. Next up, Glasgow away on Friday.