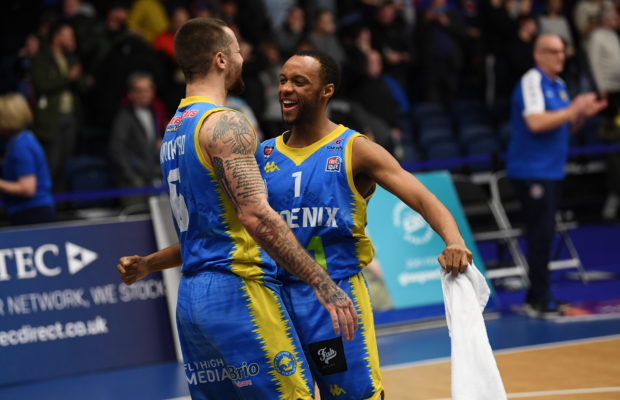 We’re now onto Week 17 in the latest bid to sort who’s hot and who’s not as the action heats up around the BBL.

The big news this week, however, unfortunately comes away from the court with London City Royals folding. The BBL confirmed their league results would be removed from the records.

The Flyers continued their winning run ahead of this weekend’s Cup final in beating London City Royals – in a result that will no longer count towards their league record. All five starters hit double figures with double-doubles for Fred Thomas and the returning Daniel Edozie, while Levi Bradley netted four triples in a 23-point haul off the bench.

Bristol have now won six of their last seven games and round out January with the chance to win their first piece of BBL silverware in their first major final since joining the league. They will also advance to the semi-finals of the BBL Trophy following the Royals’ withdrawal.

The reigning league champions and current leaders showed no signs of letting up as they put together a second straight double-winning weekend. The Lions were dominant in the first half in their 107-98 home win over Surrey before a strong third period set the platform for their 86-91 success in Sheffield.

Ovie Soko and Justin Robinson combined for 51 points on Friday night before putting up a further 50 two days later with the two-time league MVP netting 27 against the Sharks with fellow GB international Ogo Adegboye making his BBL debut with 13 minutes off the bench. Next up, a trip to Leicester to close out January’s action.

The losing streak is over as the Riders picked up their first win of 2020 by edging out Worcester, 91-87. Although the Wolves were missing key players, Leicester were also not at full-strength and in need of a confidence boosting result.

Kyron Cartwright starred with a 30-point haul with Namon Wright adding 17 points as they held off a fightback having led by as many as 22 points. It was also another game for recent newcomers Jordan Spencer and Corey Johnson to further integrate with the team, and their next encounter sees Spencer come up against his former side.

Thank you @JoePinchin for your dedication, hardwork and passion you have shown the club over the past decade. You will be truely missed! The @chicagobulls have got themselves a great one! All the best for the future #RidersFamily pic.twitter.com/vHVGn1k26Z

The Rocks leap into the top four following a dominant 98-61 league win over Sheffield, though their weekend did end in a nail-biting two-point loss in the quarter-finals of the Trophy. Ali Fraser netted 19 points with Fraser Malcolm adding 17 as Glasgow outscored the Sharks in every quarter on their way to a big league victory.

Two days later, the winning run at home in 2020 was ended as Cheshire outlasted the Rocks in double overtime with Fraser again the leading scorer with 20 points in a 45-minute effort. Another home game follows this weekend as Surrey visit the Emirates Arena in the only league game taking place.

The Sharks faced a tough weekend against the top two and came away empty handed. They trailed by as many as 40 points in an emphatic loss away at Glasgow on Friday night before never leading in a five-point loss against the Lions to drop to 2-3 in the league.

Sheffield showed more fight on their home court as they battled back from 18 down to cause a late scare with six players in double figures, while Bennett Koch fouled out in 12 minutes of action. Sheffield face another tough road test this weekend as they travel to face Newcastle for a place in the semi-finals of the Trophy.

Worcester may have fallen to defeat on the road against Leicester last week, but can take solace in only going down by four points in the absence of both Amir Williams and Kofi Josephs. That left a heavy load to be carried by the starters with Maarten Bouwknecht firing in six triples in his 29 points.

The Wolves will be hoping to be back to full strength for their biggest game of the season so far as they make the short trip to Birmingham to take on Bristol in the 2020 Cup final – aiming to go one better than their exploits two years ago having lost against Cheshire. It would also mark a first BBL title since the 2014 playoffs.

Everytime things look to be going against Cheshire, they step up and pull something incredible out of the bag. Their five-game win streak in the Cup came off the back of an 0-4 start and having recently lost captain Momcilo Latinovic for the season, they’ve not let it have an effect.

Ben Thomas’ side started the weekend with a comfortable 70-88 triumph on the road against Newcastle before heading further North for their Trophy quarter-final clash with Glasgow. Again, with just seven players, they outlasted the Rocks in a 90-92 double overtime thriller to advance as Ben Mockford – one of four to play 40+ minutes – fired in 30 points, while Michael Ochereobia had the game-winning putback in the final seconds.

A great advert for #BritishBasketball as @CheshireNix run in the @BBLofficial Trophy continues in a thrilling 92-90 double OT quarter final win over @rocksglasgow this afternoon. @BenMockford (who else!!) top scored with 30 points with his running mate @demontedenzel with 19. pic.twitter.com/8YICnqpbUF

Newcastle remain in the top three in the league, but make a drop this week after a disappointing loss at home to Cheshire. CJ Gettys posted 21 points and 15 rebounds against his former side in the 70-88 defeat as Darius Defoe returned to action, though Mike Morsell missed out.

The Eagles were quick to put the defeat behind them as they battled past Manchester for an 81-97 win away from home. Gettys put up another dominant double-double with Rahmon Fletcher handing out 16 assists and Drew Lasker finishing with 21 points, 12 rebounds and five assists.

Another clash with Sheffield awaits in the Trophy last eight with doubts over Morsell and Defoe as well as Lasker and Sade Aded-Hussein, according to head coach Ian Macleod.

Surrey had a mixed weekend with defeat on the road followed by another home win as they sit in a tie for fourth spot alongside Worcester and Cheshire. The Scorchers let up 63 points in the first half at the Copper Box before battling back behind a 34-point effort from Skyler White to go down by 10.

It was the turn of Tayo Ogedengbe to pour in 34 points less than 24 hours later as he led the team to a 10-point win this time, in overcoming Plymouth at Surrey Sports Park. So far, Creon Raftopoulos’ side have won four of five at home in the league, whilst losing both on the road – and they head to Glasgow tonight.

An improved display saw the Giants hang with Newcastle throughout the first half before their opponents began to pull clear in the second. Manchester eventually went down to a 16-point loss having now played 18 games this season without victory.

Edu Argues had another strong game with 19 points and nine rebounds, while four other players reached double figures as the side continue to battle against injuries. A much-needed weekend break may become two as their next scheduled game was to host the Royals at the start of February.

The search for a first league win continues for the Raiders as they fell to a 10-point defeat away at Surrey last weekend. Once again without Josh Wilcher and Rashad Hassan, Plymouth were competitive, but were unable to make a decisive run in the fourth quarter.

Tyrell Johnson led the resistance with 22 points with 17 apiece from Denzel Ubiaro and Kostas Jonuska. They have this weekend off before returning to action on the road against Glasgow, looking to pick up their first win since October.

The end of the road. The Royals officially confirmed their departure from the league after taking the decision to cease operations with immediate effect. They were beaten 95-71 away at Bristol last week with another depleted roster in what turns out to be the final game for a club that were BBL Trophy winners in their first year.

The decision leaves a number of top players on the open market including GB internationals Andrew Lawrence and Will Saunders, who had made his debut in last week’s loss upon return from a shoulder injury.