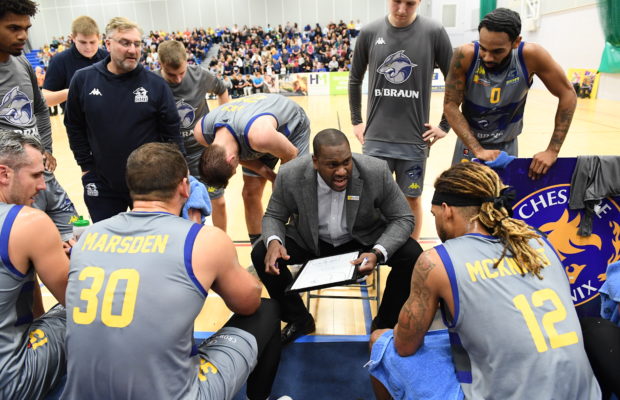 Onto Week 15 of our Power Rankings as the BBL Trophy took centre stage last weekend, though it was the teams from NBL Division 1 that made the biggest splash.

If you ask 10 people who the number 1 team in the BBL is right now, it’s safe to say you would probably get at least 5 different teams mentioned. That speaks volumes for the competitiveness of the league, and also makes ranking teams each week that much harder.

Not in action last weekend, but the Flyers take top spot for the first time. With a first-ever BBL final on the horizon, it’s an exciting time for the club and their 11 wins in all competitions are matched only by Worcester and London City.

Andreas Kapoulas’ side start their Trophy campaign this weekend with an intriguing clash against a Riders side looking to address their recent slide. Bristol will be targeting another showdown with London City Royals in the last eight with the two teams also set to meet in the league next week.

The Sharks hit double figures in wins on the season as they came through a testing encounter to beat Plymouth 62-71 to set up a last eight showdown in the Trophy with Newcastle. Five players scored 10+ points in the win in a balanced scoring attack with a strong start paving the way for the success.

Sheffield have a 67% win success rate on the season – only bettered by the Royals – and after this weekend away from action, they return with a tough task of maintaining their strong record with games against the Rocks, Lions and Royals to come.

The Riders have now dropped three straight games after missing out on the chance to make yet another BBL final under Rob Paternostro. With a three-point lead to defend on their home court, Leicester fell away in the middle periods as they were eventually beaten 71-83 on the night to exit the Cup.

With close defeats against Cheshire and Glasgow in the league, Leicester are in need of a response and head to face Bristol in the Trophy opener on Friday before getting the chance to avenge their Cup defeat against Worcester the following week.

The Lions were on the wrong end of one of the biggest ‘upsets’ in BBL history as they were beaten 82-92 by Solent Kestrels. There’s no doubting how good as the unbeaten NBL Division 1 leaders are, so it may not have been the biggest surprise, but the Lions are sitting at the top of the BBL as defending league champions, possessing a top-quality squad – even if Ovie Soko was absent.

There’s no time to dwell on the Trophy exit as the Lions are back in action with a double-header in the league, first going to Plymouth on Friday before another derby clash with the Royals at the Copper Box on Sunday. Following their 4-1 league start, Vince Macaulay was also named BBL Coach of the Month for December.

Worcester are returning to the BBL Cup final for the first time in two seasons after an impressive road win at Leicester secured a nine-point aggregate triumph in the last four. Matt Newby’s side will face Bristol in the final later this month with the chance to win the competition for the first time in their history.

The semi-final victory may have come at a price with Jordan Williams missing their subsequent Trophy encounter at Cheshire as they were comfortably beaten by 19 points with Amir Williams limited to less than four minutes on court. The two teams meet again on Friday with the Wolves at home this team in league action.

#WolfPack let's look back at some highlights from our semi final triumph over the Leicester Riders in the BBL Cup.

We are back to Championship business this Friday against the Nix, get your tickets now link below.

For all the uncertainty off the court, full credit has to go to the players and the coaching staff for their commitment. And, their return to action saw an impressive display to brush aside Surrey on the road. Matt Scott fired in a club-record 42 points including 21 in the fourth to help secure the 83-102 victory as the Royals started their Trophy defence in style.

With Andrew Lawrence out and Will Saunders a long-term absentee, the Royals may be without more players for their matchup with the Lions on Sunday as they head to the Copper Box for just their second league game played.

Newcastle take a slight drop following results elsewhere, while they did what they had to do in an emphatic 133-61 win over Dunfermline Reign to advance. CJ Gettys starred with 31 points, 19 rebounds and five assists before being announced as December’s Player of the Month and there was a first triple-double of the season as Nick Schlitzer finished with a 30-10-10 stat-line.

Other than a chance for players to get some minutes under their belts, not too much would have been learnt from the result and the Eagles will look to continue their solid start in the league when they head to Surrey on Saturday night.

Similar situation for the Rocks in you can only beat what’s in front of you. Sitting in 8th spot doesn’t reflect their start to the league campaign, but can expect to rise if that continues and they have a golden opportunity in their schedule with a run of home games to follow.

Glasgow brushed aside Basketball Wales 97-34 to secure another home tie in the quarter-finals and they host Manchester on Friday night with Sheffield, Surrey and Plymouth also set to visit the Emirates Arena in league action to round out January – three wins will be seen as an achievable target, at least.

The up-and-down nature of Cheshire’s season continues as they improve to .500 overall in advancing to the quarter-finals of the BBL Trophy. Having finally lost Karim Mouliom for the season to injury, Ben Thomas’ side produced a strong display to knock out Cup finalists, Worcester in an 88-69 victory.

Ben Mockford top scored with 19 points with Parker Jackson-Cartwright adding 18 points and eight assists with the return fixture in the league taking place on Friday before they host Plymouth, on Sunday with the chance to improve their current 2-2 record.

The Scorchers saw their winning run at Surrey Sports Park come to an end last week as they suffered a 19-point loss at home to the Royals. They were unable to contain Matt Scott as he dropped 42 with Lovell Cook posting a double-double of 19 points and 10 rebounds in the loss.

Defensive lapses book-ended the contest, but Creon Raftopoulos’ side have shown lots of improvement, particularly since the arrival of their new Americans. Another home game follows as they take on Newcastle in what could prove their biggest win of the season so far, if they get the job done.

There were encouraging signs from the Giants’ two recent league defeats, but they were unable to translate that into a first win of the season in coming up against NBL D1 opposition. Worthing Thunder were widely expected to cause problems, and they came out firing to build a lead they would not relinquish, despite a late fightback from the hosts.

Ingus Bankevics led that comeback, finishing with six triples in his 28 points and the club also welcomed back influential guard Callum Jones, but could not prevent a 15th defeat on the season. A tough trip to Glasgow is up next on Friday as the Giants still look to get back to full strength.

Plymouth’s losing run continued last week as they went down to a nine-point defeat at home to Sheffield in the Trophy. The Raiders would likely have moved back up to 11th following Manchester’s defeat to Worthing, but for the news that key player Josh Wilcher will miss around four weeks after undergoing surgery for a non-basketball related condition last Sunday.

His absence will be a huge blow for the club, who also announced the departure of Theo Turner this week. Ex-Bristol and Sheffield forward Leslee Smith made his debut against the Sharks and the Raiders will need their supporting cast to step up as they first welcome the Lions on Friday before visiting Cheshire.