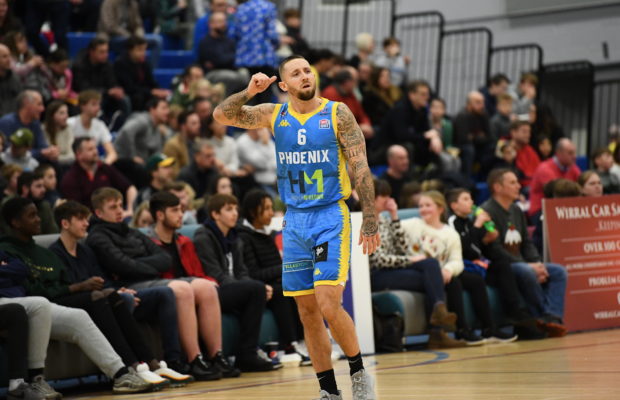 We’re now 12 weeks into our Power Rankings for the 2019-20 BBL season with the league campaign already taking shape in the early stages.

The Lions are the early front-runners ahead of the final weekend of action before the Christmas break, while one half of the 2020 BBL Cup final will also be decided

A mixed weekend for the Royals and they were in danger of losing top spot in our rankings as they appeared on course for two defeats before mounting a fourth quarter comeback against Plymouth. Firstly, though, their unbeaten win streak was ended with somewhat of a collapse against Bristol to fall to a two-point defeat ahead of the second leg.

The Royals have been very much hit or bust in the final periods this season and found a way to overcome the Raiders on the road in their league opener with Orlan Jackman’s 24 points helping his side to a 90-98 victory after trailing by 15 with 10 minutes left. They need to beat the Flyers by at least 3 points on the road Saturday in order to make their third BBL final in just their second season.

The Riders have one foot in another BBL Cup final after edging out Worcester 63-66 in the first leg to take a three-point cushion back home for the second leg. Namon Wright top scored with 17 points, while Jamell Anderson had another strong game with 16.

However, they fell to a 95-91 defeat in their second road game as they came up short in overtime against Cheshire in the league with Kyron Cartwright handing out 17 assists as Jesse Chuku had 22 points. The Riders have the weekend off before facing Glasgow next Friday.

Have you checked out the highlights from the first leg of the @BBLOfficial Semi-Final?

The Sharks make a small rise to third even without taking to the floor, but expect to see plenty of movement in the rankings this season as teams continue to beat each other throughout the campaign.

Atiba Lyons’ side have a testing return to action as they look to halt the charge of the defending league champions when they face the Lions at the Copper Box on Sunday.

The Lions are the outright leaders at the top of the BBL Championship after taking their win streak to three with two wins over the past week. Four players hit double figures in a crushing 73-103 success at Manchester before having to dig deep to overturn a 15-point deficit to beat Bristol 99-88 at the Copper Box in mid-week.

Ovie Soko took over in the fourth to finish with 22 points after Jordan Whelan had kept his side alive in the early stages and Andre Lockhart proved a spark on the defensive end. Justin Robinson hit his stride at the right time and had a 17-4-3-3 stat-line to reflect his all-round influence, and the Lions are at home again on Sunday with a key clash with Sheffield.

You never really know what to expect with Bristol but this team are beginning to produce the goods more often than not. They battled away to secure a narrow advantage to take into the second leg of their semi-final against London City Royals with a 10-0 run solely consisting of dunks proving pivotal.

Bristol then showed the benefit of their home advantage on Saturday with a convincing 81-66 success over Worcester with Fred Thomas’ 17 points leading a balanced attack. The Flyers almost made it a perfect week having forged a commanding lead on the road against the Lions before coming up short in the final quarter, and need to regroup as they return home for the crucial clash with the other side from London this Saturday.

If the road win against Manchester didn’t exactly raise eyebrows then claiming a second win of the season against Leicester certainly did. Ben Thomas’ side had to grind it out in overtime as they eventually prevailed 95-91 behind 31 points from Ben Mockford, while Parker Jackson-Cartwright had 26, 11 and 7 in another all-round star display.

The challenge for the Phoenix will be to back up those big wins – as they did during their five-game streak in the Cup, and a testing double-header on the road awaits this weekend. First, they face Surrey on Friday night before looking to avenge their Cup loss to Glasgow at the Emirates Arena less than 48 hours later.

Worcester have comfortably been a top-four performing side this season, but our rankings take momentum and recent results into consideration (otherwise there would probably be no movement) and two defeats, albeit against in-form sides sees them drop.

The Wolves ran Leicester close on their home floor in the first leg of the semi-final before going down 63-66 to leave the unfavourable task of needing to win by at least four points at the Morningside Arena. They were then held to below 70 points on the road at Bristol in a 15-point loss and are back at home on Friday night to welcome Glasgow.

By virtue of not being in action coupled with the teams around them enjoying big wins, the Eagles slide in our rankings, despite not tasting defeat in the league so far. They showed signs of encouragement during the Cup campaign and battled past Plymouth in their opener last time out.

The club revealed the frustration behind the wait for Rodney Glasgow to return to action following visa issues and Newcastle will have to continue on without their guard this weekend as they take on Manchester for the third time this season having recorded back-to-back wins in November.

Not in action last weekend, the Scorchers have looked to strengthen their squad with the signing of Gatluak Thiep. The seven-footer’s arrival comes after the club confirmed that they were unable to extend Ryan Richards’ stay.

Surrey have a rare Friday night home game as they look to move above .500 in the league after a tough Cup campaign with unbeaten Cheshire the visitors to Surrey Sports Park in the final home game of 2019.

As you were for the Rocks, also, with their break last weekend. After announcing the signing of American guard Dante Thomas, they did indeed make another addition by bringing in compatriot Terrell Vinson to bolster their options in the front-court.

Glasgow return to action with a double-header in the league as they take on Worcester on the road before hosting Cheshire on Sunday having won the last meeting between the two sides in the Cup last month.

From Leicester and Newcastle to the London City Royals, an 0-3 start was perhaps expected, but after an improved display against the Eagles, Paul James’ side continued to build and should have broken their duck in the league last Sunday. Leading by 15 heading into the final quarter, Plymouth ended up falling short in a disappointing conclusion to lose 90-98.

Sam Daniel scored his side’s first 18 points in the contest before finishing with 33 in defeat, and the Raiders will have extra time to reflect and recover from the loss as they return to action to face Bristol Flyers in a South-West derby a week on Saturday.

The Giants were last victorious in competitive action on April 17th when they beat Sheffield, but a win is not looking close at the moment after they suffered their 11th defeat of the campaign in a 30-point loss at home to London Lions. Ingus Bankevics led the resistance with a 28-point haul with his side trailing by as many as 41 points.

And, things don’t appear to be getting any better as they prepare to visit Newcastle with Head Coach Danny Byrne revealing a number of increased absentees for the trip including the key figure of Callum Jones.

🚑 Coach Danny Byrne phoned in an injury update en route to Newcastle with the team…well, half the team!

You might want to listen to this Giants fans. 🙃#beeGIANT🐝🏀 pic.twitter.com/b13s6CuPUg