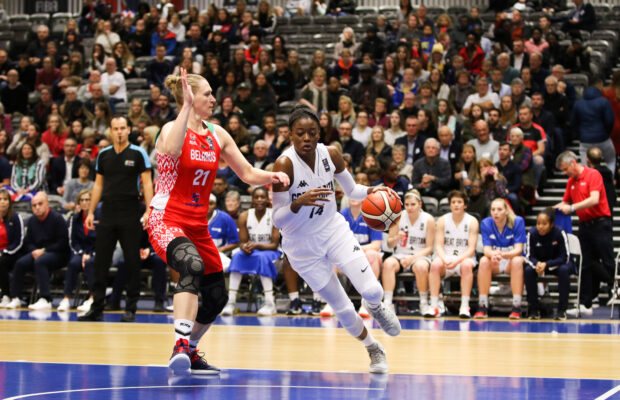 Great Britain Senior Women suffered a heavy defeat at the hands of Belarus as they fell to a 59-89 loss in Manchester on Sunday evening.

Chema Buceta’s side beat Poland on the road in mid-week, but drop to 1-1 in their EuroBasket Women 2021 qualifiers campaign. Samuelson fired in five in a row to put GB up 7-5 early on with Fagbenle enjoying success inside with 10 points in the opening period. However, Belarus went on a 9-2 run to help build a 21-15 cushion after 10 minutes.

The lead hit double figures at 28-18 before a three from Simpson would halve GB’s deficit at the mid-point of the second. Another strong finish from the visitors saw them take a 40-27 advantage into the half-time break.

🔐 Defence
👀 Vision
💰 Money@eilidhsimpson41 & @ksam44 combining at both ends for GB!

Belarus continued to have control and dominated inside, exploiting mis-matches and extended their lead to 60-42 heading into the final period.

There proved to be no way back for GB as they conceded 30 points in the fourth with Belarus’ convincing win seeing them grab the upper-hand in the group with the margin of victory proving vital in a three-team group.

– GB starters were
– Jo Leedham-Warner missed out again due to injury, but was on the bench
– Hannah Shaw, Mollie Campbell and Stef Collins were all DNPs
– Chantel Charles saw her first minutes in the fourth quarter
– GB next play Poland at home in November 2020