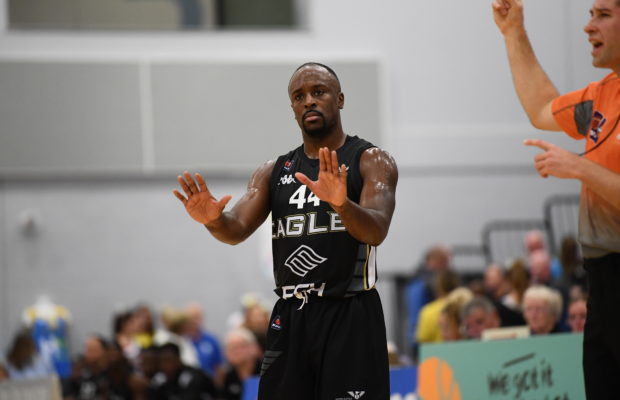 Moving onto the third week of our BBL Power Rankings as we look through the teams to track the progression throughout the 2019-20 season on the road to The O2.

Three wins from three and the Royals rise to the top of our rankings as they continue their strong start under Lloyd Gardner. Their latest victory was their most impressive as they brushed aside rivals London Lions with a 92-77 triumph at Crystal Palace with an improved atmosphere at their arena.

Orlan Jackman led the way with 23 points in the win against his former club, while Andrew Lawrence had 12 points and five assists before seeming to pick up an injury in the second half. The depth is starting to show with 32 points coming from a bench that also included Ajou Deng without seeing minutes just yet. A Royals debut at the British Basketball All-Stars Championship awaits Sunday.

What a way to bounce back for the Eagles as they went 2-0 on the road at the weekend with victories over Leicester and Cheshire to become the first team to four wins this season. Putting a home defeat behind them, Ian Macleod’s side rode into Leicester and came away with an 88-94 victory as Rahmon Fletcher produced another masterclass with 28 points and nine assists with Rodney Glasgow making an instant impression with eight assists on his debut.

Fletcher then posted a double-double with 17 points and 10 assists in a 92-100 success against Cheshire with Sade Aded-Hussein stealing the headlines with a dominant performance of 30 points and 13 rebounds to ensure the Eagles lead the way in the North Group with four wins from five.

⭐️5️⃣ An outstanding weekend for our Eagles saw four of them selected by the @BBLofficial and @WBBLofficial in this week's pick of the players. Well done Sade, Rahmon, Mante and Anja! #AllTeamEagles https://t.co/DR8pXGv7Em

It’s not as dramatic a drop as intended for the Riders in the wake of suffering their first defeat. Rob Paternostro’s side are now 3-1 in the North Group, but failed to come through their toughest test to date as they went down by six points against Newcastle on their home floor. Conner Washington’s departure perhaps felt more significantly in this matchup given his defensive calibre in a duel with Rahmon Fletcher.

Josh Ward-Hibbert managed to register another double-double with Kyron Cartwright posting double-digits in assists once more and there was a 20-point outing for Jesse Chuku. A debut was given to Zoran Talley with just under 10 minutes of action under his belt and will be looking to showcase his skillset as the Riders attempt to bounce back strong against Cheshire on Friday before the All-Stars Championship.

Worcester move up into the top four as they maintained their unbeaten start to the season with a hard-fought win on the road against Bristol Flyers. Cortez Edwards starred with 35 points, nine rebounds and nine assists in the overtime triumph as the Wolves keep pace with London City Royals in the South Group with a 22-point comeback.

And, Matt Newby’s side face that challenge on Friday as they welcome the Royals to the Midlands in a top-of-the-table clash in the Cup. Still not at full strength, Worcester will be hoping they can ease the load on their starting five with three players almost going the distance with 42+ minutes each last time out in Bristol.

The Rocks return on the road this weekend as they take on Sheffield Sharks with the two teams part of a four-team group with just one loss so far in the North Group. Pryor showed out at last year’s British Basketball All-Stars Championship in a thriller against Newcastle and a repeat matchup is set following the draw for the first round.

A minor rise for the Sharks, despite not taking to the court this past weekend. With extra rest, they return to action at Ponds Forge on Friday to welcome Glasgow with a chance of moving into the top two spots in the North Group.

Sheffield then head south to the Copper Box on Sunday for their third consecutive British Basketball All-Stars Championship appearance, having yet to make it to the Final. The likes of Nick Lewis and Mackey McKnight may relish extending their range to the 5-point line as part of the tournament’s innovations.

A small drop for the Lions as they still await their first win of the new campaign after being beaten by London City Royals last Saturday. Brandon Peel top scored with 19 points and had 13 rebounds with Justin Robinson adding 18 points, though he was held to 4 of 14 shooting on the night.

Jorge Romero made his debut off the bench with the Lions also adding former Royal Sam Toluwase to their rotation. They will be on home court on Sunday for the All-Stars Championship having won the inaugural edition at The O2 Arena two years ago, as they have another weekend off from Cup action.

The Raiders jump above their South-West rivals after picking up their maiden success of the new season. Paul James’ side had to come through a close encounter at home to Surrey with Josh Wilcher influential as ever with a 30-point haul in playing the full 40 minutes. Rashad Hassan posted 26 points with Tyrell Johnson adding 19 off the bench along with nine rebounds in vital contributions.

Momentum gained ahead of a first derby meeting with Bristol with the opportunity to make it back-to-back wins and close the gap on the top two in the South Group. Despite making the playoffs last season, they failed to qualify for the All-Stars Championship with Surrey Scorchers taking eighth spot as the defending champions.

Check out Raiders TV’s highlights of the first win of the season!

The opening night success has since been followed with successive losses for the Flyers as early lift-off has been grounded. Andreas Kapoulas’ side came very close to a second victory having looked in command with a 22-point lead against Worcester. Lewis Champion had another strong game against the Wolves – having hit a game-winner last season – though his 20 points, coupled with Fred Thomas’ team-high 22 were not enough in a 94-96 reverse.

Bristol are back at the SGS Wise Arena once again on Friday, as they too will see the South-West derby as a prime opportunity to get back on track as a dangerous Plymouth come to town in the short trip. However, there will be no Kapoulas and Nick Burns antics with the golden buzzer at the All-Stars Championship on Sunday, unfortunately.

Cheshire are another side still looking to get off the mark in the win column, but looked better in a 92-100 defeat at home to Newcastle – particularly with captain Momcilo Latinovic absent. Parker Jackson-Cartwright had 26 points and nine assists in 40 minutes, while sharpshooter Louis Sayers added a BBL personal best of 25 points.

The Phoenix had led by 11 points in the first half before a leaky defence allowed 60 points in the second half to fall to another defeat. Their Cup campaign does not get any easier with a trip to Leicester on Friday before making their All-Stars Championship debut two days later.

More promise for the Scorchers could not prevent another defeat as they were edged out away at Plymouth on Sunday. Having led by as many as nine points, Surrey eventually went down 96-91 as Josh Wilcher closed out the game with the final five points.

Henry Wilkins fired in 21 points with Skyler White just behind with 20 as the visitors also had three other players in double figures with their scoring firepower not lacking so far in three games. Creon Raftopoulos and his side have a break from Cup action this weekend as they head to the Copper Box Arena to defend their All-Stars Championship title, hoping victory can inspire an opposite reaction this time around.

“We’ll approach it the same way as we did last year, and hopefully have the same results"

Creon on Sunday's @BBLofficial @AllStars_BB Championship, as Scorchers go to the @CopperBoxArena to defend their title

The Giants stay at the foot of our rankings after going down to their fourth defeat of the season – and second at the hands of Glasgow. However, it was finally decided that the first of those has been chalked off due to the aforementioned ineligiblity of three Rocks players, but rather than a 20-0 forfeit, the game will be played again.

In the recent – and legitimate – defeat, Del’vin Dickerson showcased more strength in the post in his 26-point outing and Manchester will have a chance to recover this weekend before returning to action at home to Cheshire in a big clash next Friday on 18 October.