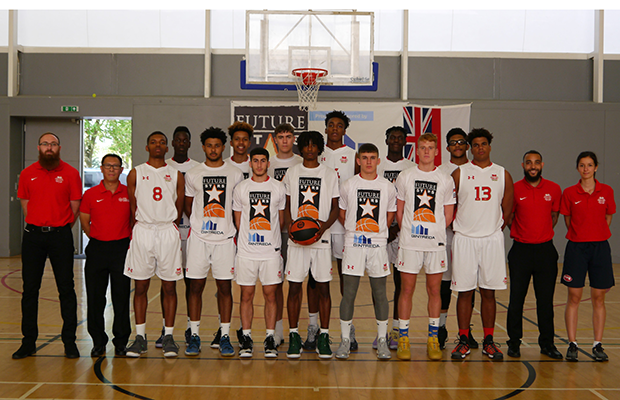 England finished the tournament with a 2-2 record, picking up wins against Maccabi Tel Aviv and Oxygen Orange 1 basket, whilst falling to Rytas Vilnius and Porsche Ludvigsburg.

Cameron Hildreth (pictured below), fresh off a break out year, led England throughout the tournament to be named to the All-Star 5, averaging 15 points, 4.5 rebounds and 1.5 assists in just 20 minutes per game on 44% shooting, including a tournament-high 27 points in the third place game. 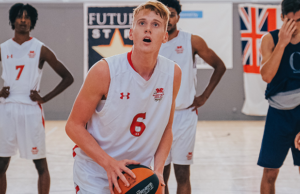 “It has been a great learning experience to lead the England U18 select team at the Future Stars tournament,” Head Coach Troy Culley said. “It is an opportunity that I am extremely thankful for as I have been exposed to several different situations over the past week that will only help my growth as a coach. In a limited window both players and staff continuously worked to represent the country in the right way and I really appreciate their efforts.

“We took a positive step forward in exposing everyone to a different level of basketball, away from the norm, and I believe the experiences gained can be carried into the domestic season as well as identifying gaps that need to be developed in preparation for the U18 European Championships next summer.”

Rytas Perla Vilnius team remained unbeaten in the tournament and claimed the title after beating Porsche Ludvigsburg 68-58 in the final, with their point guard Augustus Marciulonis voted MVP of the tournament.

England vs Maccabi Tel Aviv
Ndewedo Newbury posted a game-high of 13 points in his debut to lead the England U-18 Men past Maccabi Tel Aviv 79-57 to open the Future Stars tournament on Friday afternoon.

Franklin Agu made a valuable contribution on his debut (10 points & 7 rebounds), whilst the trio of Amari Williams, Josh Uduje and Alexander Distras added 9 points a-piece for England, which shot 40.7 percent from the field. England dominated inside by hitting just over 50 percent of its 2-point attempts, outscoring Maccabi 50-28 in the paint and 32-8 off points from turnovers.

“I think what made us so dominant was the way the guys came out and played defense” said Culley. “We came out strong, which we needed to, and this fuelled our ability to get out and create in the open floor.”

England, which never trailed, took the lead on the opening possession and had 11 assists on 15 made field goals to build a 37-27 advantage at halftime. England led 34-11 early in the second quarter before a 16-2 run narrowed the gap. Maccabi would not get closer as a 22-13 third quarter rebuilt England’s hold on the game which they would keep until the end.

“The aim for the first game was to come out, be competitive and show we belong” added Culley. “Maccabi is a well-known name within basketball. They are dangerous offensively, so you must stay focused. We switched off in the second and nearly got caught for it, but I am proud of how the guys weathered the storm like we did to end the second quarter.”

Yanir Gadot had 11 points and Yuval Levin added 10 for Maccabi, which shot 37.7 percent in the loss alongside 25 turnovers.

England v Ludwigsburg
Cameron Hildreth had 15 points to go with six rebounds and two steals, but England lost 81-66 to Porsche Ludvigsburg to end day one at the Future Stars tournament.

Franklin Agu added 9 points for England, which shot 39.1 percent and never led after the first quarter. Marcus Bucknall and Greg Wild both had 7 points. Ludvigsburg opened their largest lead of the game (43-28) mid-way through the second quarter before England fired back after a time-out to reduce the deficit to only seven at the half (50-43).

The gap became as little as two-points in the third, but they got no closer as a dominant start to the fourth quarter broke the game opened and sealed England’s fate. Ariel Hukporti’s double-double dominated the game (20 points and 13 rebounds) and was supported by 18 points from Tyreese Blunt and 16 points from Johannes Patrick. Ludvigsburg outrebounded England 55-42, led 20-7 on second chance points and finished with 11-made three pointers.

“Tournament play comes at you fast” said Culley. “The margin for error when you play against teams of this calibre is so small and unfortunately we found ourselves in a hole in the second. I am proud that they guys never gave up and fought all the way back to make it a one-possession game. Experiences like this are invaluable to their development”.

England vs Rytas Vilnius
Cameron Hildreth had 11 points to go with four rebounds, but England lost 73-64 to Rytas Vilnius to finish day two at the Future Stars tournament with a 1-2 record.

Joshua Uduje added 8 points for England whilst Ndewedo Newbury and Veron Eze each contributed 7 points. Marcus Bucknall’s layup with five-minutes remaining in the first half gifted England it’s largest lead of the game at seven, but Rytas would respond with a run of their own to reduce the lead to 1 (36-35). There wasn’t much to separate the teams in a game that had 16 lead changes and 5 ties but Vilnius used a trio of three-pointers to break the deadlock in the third before two further triples from Jokubas Rubinas extended the deficit to as many as 16, before England finished the game on a 7-0 run.

England Coach Troy Culley commented: “We have mentioned how important it is to stay concentrated and locked into what we are trying to do but unfortunately Rytas did a great job of punishing us when we switched off today and we struggled to truly recover.”

Marcus Bucknall had his best game of the tournament coming off the bench with 18 points and 6 rebounds. Franklin Agu (12 points and 9 rebounds) and Josh Uduje (15 points, 5 rebounds and 3 assists) rounded out a balanced England attack, which shot 47.2 percent from the field and 71.9% (23/32) from the free throw line. England dominated inside by hitting an efficient 57.4% from 2-point range, outrebounding their opponents by 31 and winning the fast break battle 21-10.

“The two previous losses certainly played a part in how we responded today” said England Coach Troy Culley. “As a group we know how quickly games can get out of hand against good competition. We found ourselves down by 9 halfway through the second quarter and had to adjust quickly. The team did a great job of not panicking and executed extremely well when it mattered most.”

Despite giving up 28 points in the opening quarter, England remained within striking distance of Oxygen Orange Basket going into half-time down 47-43. The third quarter would be deadlocked at 22-a-piece, setting the scene for a dramatic fourth quarter. Josh Uduje’s breakaway dunk and Cameron Hildreth’s back-back threes highlighted a dominant start to the fourth quarter for England, which saw them outscore their opponents 21-6 and establish an 11-point lead with 5-minutes to play. Oxygen would not threaten again as England closed out the game and completed the comeback.

“The boys deserved to finish the tournament this way” added Culley. “The importance of valuing the possessions has been stressed throughout the tournament and I feel the guys finally grasped that concept in this game. It takes a lot of effort to dig deep and fight back when you are down, and I am very proud with how the team handled themselves today to get the job done”.