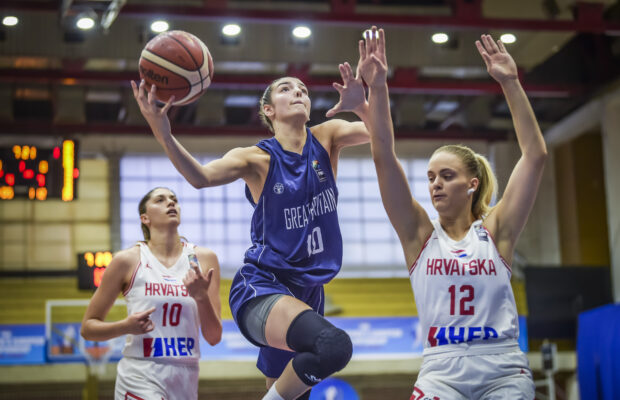 Great Britain Under-20s opened the second round at the European Championships with a convincing 89-67 win over Croatia in Prishtina, on Wednesday evening.

Jeff Jones’ side followed up their first win over Ukraine with another strong performance to boost their promotion hopes with a semi-final decider tomorrow against Israel.

Loren Christie starred with a red-hot shooting display from downtown with five triples in a 26-point haul.

Ebony Horton contributed 18 points on 6 of 8 shooting and Holly Winterburn dished out eight assists to go with 17 points and six rebounds, while Shauna Harrison had 12 points and seven boards.

GB edged a close first quarter to lead 20-18 and the gap would remain the same heading into half-time at 41-39. Their deficit was never more than two points and GB took control in the third with a dominant quarter.

Winterburn set the tone with a corner three before Ebony Horton followed suit in an 8-2 start to the period. The Oregon commit fired in another soon after before turning provider for Christie as the lead began to balloon.

Charlotte Ellmore joined in on the act from downtown and Christie came up with the perfect finish with another three to beat the buzzer and put GB in total command with a 69-47 advantage.

Croatia started the fourth brightly, but Horton came up with back-to-back scores and GB were able to ease to victory.

They play Israel tomorrow at 3:30pm UK time with a win enough to make it into the semi-finals with Ireland facing Croatia in the other group game to decide the other spot.