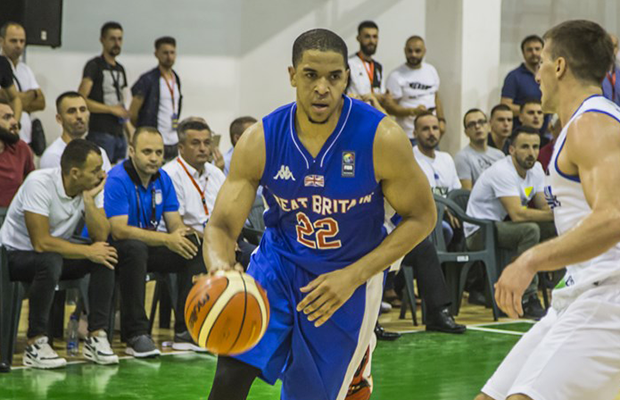 Great Britain Senior men opened up their EuroBasket 2021 pre-qualifying campaign with a scrappy 71-63 victory over Kosovo on Wednesday night in Kosovo.

Gabe Olaseni led GB with 15 points and 13 rebounds, Luke Nelson added 14 in his return to the squad, whilst Myles Hesson finished with 13 points, 9 rebounds and 6 assists in his first game as captain.

“It’s a great feeling to get a win, especially for Nate as it’s his first game,” said Hesson after the game, reflecting on the GB performance.

“We had a lot of young guys, a few guys getting their first caps today. It was a great win and hopefully we can continue.

It marked a successful start for new Head Coach Nate Reinking, despite it not being the most convincing performance.

“It’s a special win, the first one is always special, but we still have work to do,” said Reinking reflecting on the game. “I’m just happy the guys stuck together and pulled this one out.

“In both halves I think their zone kinda broke our flow a little bit, but it took us into the second half to get used to it. We started moving the ball a little better and we ended up making shots that were big down the stretch.”

GB started well as they jumped out to a comfortable 8-2 lead behind some positive play on offence that quietened the home crowd. Midway through the quarter Olaseni would already have six points to his name, but a couple of fouls sent him to the bench earlier than Reinking would have liked.

Leading 15-10 after 1, GB’s offence became disjointed as the turnover increased and struggles from the floor emerged, particularly from long range. Fortunately, Kosovo were experiencing a similar problem, leading to a low scoring passage where both sides lacked fluidity.

The hosts would have the better of things to end the half and they eventually tied the score at 22 with just over 90 seconds remaining. Dwayne Lautier-Ogunleye would then open his senior GB account as he sank a pair of free throws as GB would lead 28-27 at the break.

A 2-9 run by the Kosovans threatened to blow Reinking’s debut off course as the hosts came out after the break looking to land a knockout strike. GB continued to struggle from deep, going 3/17 before their luck finally changed to spark a pivotal passage of play.

A three from Conner Washington jump started the GB offence and from there, the team couldn’t miss. Knocking down their next 4 attempts from long range helped the visitors not only erase the Kosovan lead but establish one of their own as the offence came to the party and the points began to flow.

That 16-2 run helped GB come close to a double digit lead, but a late triple from Kosovo’s Drilon Hajrizi meant Coach Reinking’s side had to settle for a 50-46 advantage heading into the last.

GB’s offence threatened to stall once again as the 4th quarter began, going 0-3 before a Teddy Okereafor steal and breakaway got the scoreboard moving once more.

Then came the play of the game for GB as Washington’s steal fed an open Luke Nelson who threw up a lob for stand-in captain Myles Hesson on the alley-oop. It gave GB some much needed energy as the game headed towards the stretch.

Kosovo would pull within a single basket with just 3:20 remaining, but Olaseni would come up big to keep GB ahead. Scoring 5 vital points, including a three-point play on a tough drive to the basket, those scores provided a much needed burst of offence to keep GB ticking.

The lead precariously balanced at 6 when Okereafor stepped up to hit a dagger three with 33 seconds left, putting the game to bed on a day when GB weren’t at their best but they did enough to grab a valuable win.