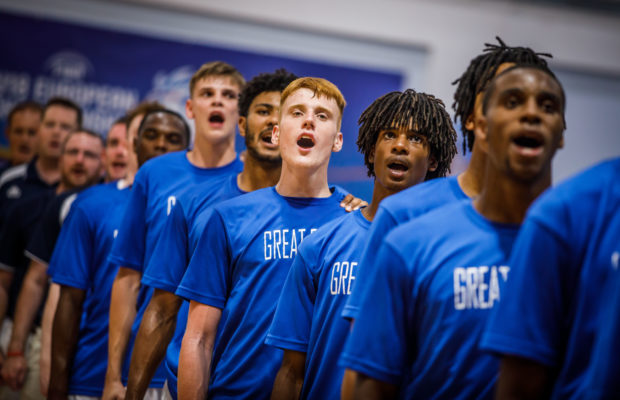 Great Britain Under-18s finished 8th at the European Championship after defeats to France and Lithuania in Volos, over the weekend.

Alan Keane’s side end up with a 2-5 record, but importantly retain their Division A status for next summer after the crucial victory over Montenegro in the Round of 16 to follow their group success against Serbia.

GB were beaten 88-70 by Lithuania as they attempted to equal their best finish in the tournament having claimed 7th spot in 2018.

Tosan Evbuomwan posted 18 points and 10 rebounds for another double-double with Mate Okros and Ethan Price adding 11 and 10 points, respectively.

Lithuania raced out into a double digit lead in the first quarter and the damage was done, leading by as many as 22 in the contest.

GB stayed competitive for the final three quarters, edged out by no more than four points in each period as they went down fighting to close out the tournament.

On Saturday, GB U18s had made a strong start against France before going down to an 81-52 defeat to start the 5-8 Classification Round.

Tomiwa Sulaiman led the resistance with 14 points and 9 rebounds as the only player in double figures with Tosan Evbuomwan adding seven points and seven boards.

GB led 21-12 after the opening 10 minutes after five straight points to spark a 12-4 burst, but the momentum swung the other way in the second after being outscored 29-9 to trail by double figures at half-time.

France continued to pull away in the second half with GB held to 22 points in suffering a heavy loss.