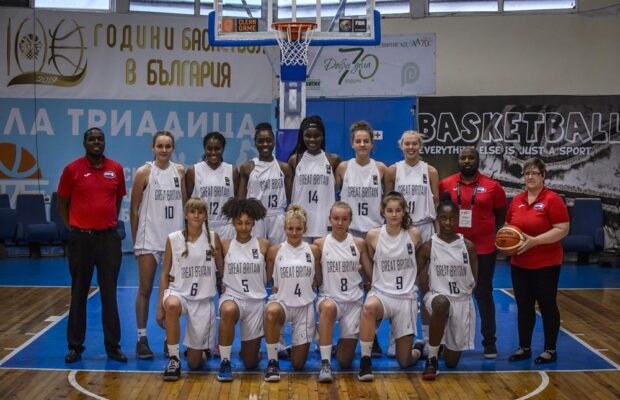 Great Britain Under-16s recovered from two opening defeats to win three straight as they advance to the quarter-finals of the European Championships, Division B.

Kenrick Liburd’s charges suffered close losses to open the tournament before a strong response saw them finish 3-2 in the group phase – edging out Belarus and Ireland into second with a superior head-to-head record.

Here’s a recap of each of their games so far:

GB opened their campaign with a hard-fought 46-41 defeat against Portugal – who would top the group with a 5-0 record. Having trailed 12-2 early on, GB battled back in the contest but were left to rue 41 turnovers, despite winning the rebounding battle 64-34. Isimenme Ozzy-Momodu collected 17 to go with a team-high eight points as her side tied the game at 39-39 midway through the fourth before being unable to take the next step to lead for the first time.

Once again, GB came up short as they fell to a 61-58 loss at the hands of Belarus on the second day to drop to 0-2. Leading by as many as six points in the first half, GB fell 42-34 behind in the third before setting up another thrilling finish, down one inside the final three minutes. Ozzy-Momodu had another big game with 16 points and 20 rebounds in defeat, while Molly Lavin had eight points and 13 rebounds.

GB picked up their first win in dominant fashion as they brushed aside the challenge of Albania in an 84-47 victory. Ozzy-Momodu posted 18 points along with an incredible 23 rebounds with Joise Leavold adding 17 points as all players saw 10+ minutes on court with the trio of Lavin, Abbey Whitehouse and Isobel Bunyan scoring nine points apiece. GB made a strong start and strengthened their grip with a 19-1 second period with the damage done in the first half.

GB continued their momentum after the rest day and claimed an impressive 71-64 triumph over Ireland to keep their quarter-final hopes alive. They trailed 15-9 after the opening 10 minutes before growing into the game as they turned a 37-31 deficit into a 10-point lead with a stunning 16-0 run. Ozzy-Momodu produced big scores down the stretch, completing an 11-point, 10-rebound double-double with Asha Andrews the leading scorer in the win with 14 points.

Following Ireland’s eight-point victory over Belarus in the earlier game, GB just needed to beat Austria to seal their place in the last eight, and did so with a convincing 66-44 success. Andrews again led the way with 16 points, while Fatmata Janneh was close behind with 15 along with five boards and three assists with Ozzy-Momdou grabbing 12 rebounds. GB held their opponents to just six points in the second quarter before a 22-11 third period gave them complete control in the contest.

GB U16s face unbeaten Slovenia in the last eight with the three teams that make it onto the podium earning promotion to Division A.