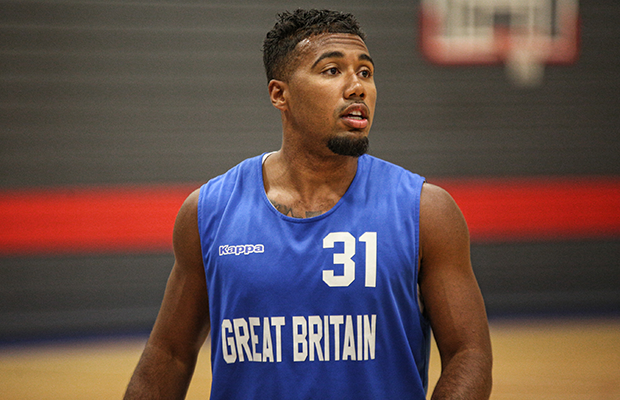 Nate Reinking has revealed the 12-players who will be suiting up for the Great Britain Senior Men on Wednesday night on the road against Kosovo (7:30pm tip) after training camp opened in Manchester last week.

It will mark GB Senior debuts for Dwayne Lautier-Ogunleye, who has just graduated from Bradley, and Kingsley Okoroh, who has just finished his rookie year in Spain, whilst another three players, Conner Washington, Mo Soluade and Jamell Anderson will be registering their third and second caps, respectively.

GB stalwart Dan Clark is out with injury for the opener but expected to return before the end of the pre-qualifiers, whilst Ovie Soko is also not included for the first game, despite appearing at camp, believed to be due to contractual agreements with ITV following his appearance on Love Island this summer.

It is expected there will be some movement in the squad across the games, with a number of players available in the second week that weren’t available during the opening of camp.

Gareth Murray is expected to join the squad later after he has been absent whilst coaching the Great Britain 3×3 Under-18 squad.

Reinking is the new head coach following the resignation of Alberto Lorenzo and GB must top a group containing Kosovo and Luxembourg in order to advance to the main qualifiers.