Improved GB Under-18s Drop to 0-3 with Loss to Ukraine - Hoopsfix.com 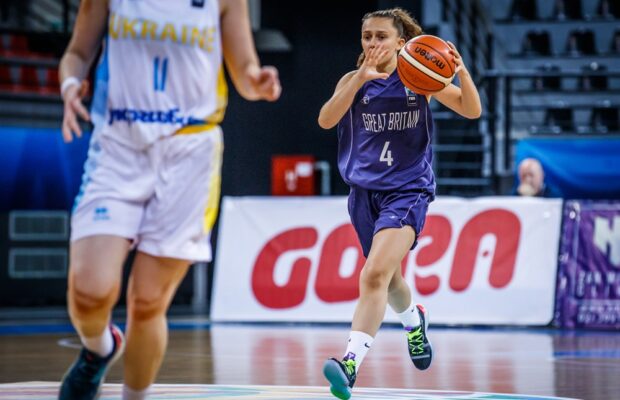 Great Britain Under-18s produced an improved display despite suffering a 65-46 loss against Ukraine in Skopje, on Sunday evening.

They drop to 0-3 after losing their third game in as many days heading into a rest day on Monday with two group games still to play.

Brahe Ashton hit double figures with 14 points along with four assists, while Esther Little pulled down 13 rebounds for the second time in the tournament to go with four points, three assists and three steals.

Alex Baker’s score – created by an impressive assist from Ashton – was GB’s only contribution to their points tally in the opening six and a half minutes as Ukraine led 6-2. However, Amelia Sandie and Pollyanna Storie helped push GB ahead and they would lead 9-8 at the end of the first.

Ashton fired in a three at the start of the second to spark a 10-2 opening with Jade Mbam also following suit from downtown as the gap was extended to 19-10. GB had to wait almost four minutes for their next score which came through Clara Kelly’s long two as their opponents hit three triples to tie the game at 21-21.

Little had already collected nine boards, but picked up her second and third fouls in quick succession late in the first half with GB restoring their advantage at the foul line to take a 26-22 advantage into the interval.

A fourth foul for Little came little over a minute into the third just after Ukraine surged ahead with consecutive threes. Ashton broke GB’s three-minute drought with back-to-back scores to cut the gap and they soon levelled through five in a row from Taylor-Willis.

A 7-0 close saw GB fall behind before scoring the first four points – including another Ashton three – to close to within three at 42-39 with 6:28 remaining. From there, Ukraine went on a 13-2 run to derail GB’s charge and eventually claimed a flattering 19-point victory.

More signs of improvement for GB and they will be targeting two wins against Luxembourg and Albania to round out the group phase when they return to action on Tuesday. Two wins will see them have the chance to play for a finish as high as ninth in the 9-16 Classification.