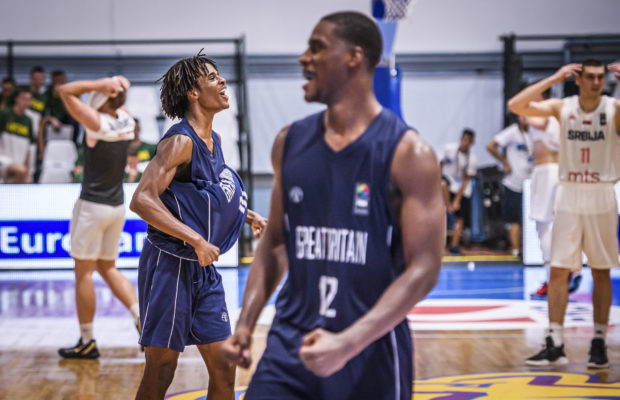 Great Britain Under-18s pulled off an impressive 87-85 triumph against two-time defending champions Serbia in overtime at the European Championships in Volos, on Sunday.

Alan Keane’s side bounced back from an opening loss to Turkey to stun Serbia – backing up the Under-20s’ result earlier this month, despite the absence of injured trio Mate Okros, Cam Hildreth and Sam Grant.

VICTORY for GB Under-18s as they defeat defending champions Serbia 🇷🇸 87-85 in overtime!!

Josh Uduje went 12 of 13 from the line in his 22-point haul, while Tosan Evbuomwan posted 18 points and 10 rebounds with Tomiwa Sulaiman also adding a double-double of 17 points and 13 boards.

A run of six straight points helped GB lead 10-5 early on before trailing 16-14 at the end of the opening period. They re-gained the lead midway through the second, but Serbia used an 8-0 run to help build a 39-31 advantage at the interval.

The gap was 10 soon after play resumed, though GB stayed in contention as Chive and Sulaiman hit from deep and they would be 57-51 behind ahead of the final 10 minutes. Down as many as nine in the final period, GB hit back and gradually chipped away at their deficit to set up a tense finale.

Uduje hit a pair of free throws to give his side a 73-72 lead with 2:13 to go and needed another pair to tie the game after a Serbian triple then Evbuomwan’s basket saw the game head into overtime.

Evbuomwan kickstarted the extra period with a three of his own and Uduje’s coast to coast drive put GB 84-78 ahead and in the driving seat. A 5-0 reply kept it close, but Sulaiman came up huge at both ends of the floor with an important score followed by a block and the defence held out on the final possession to claim a thrilling win.

Re-watch the full game below: