Inspired GB Fall to France in Semi-Final, Play for Bronze 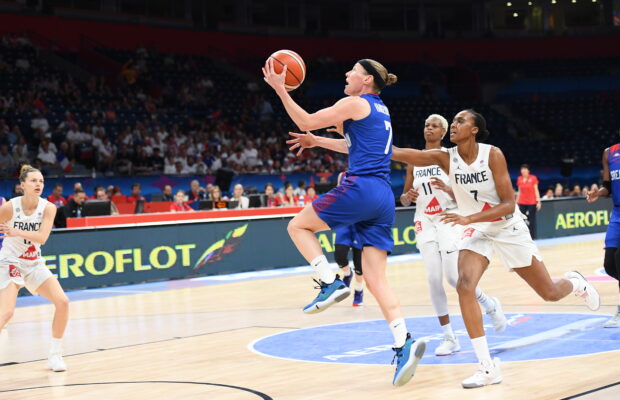 Great Britain’s Senior Women fell short of a place in the FIBA Women’s EuroBasket 2019 final after suffering a 63-56 defeat against France in Belgrade, on Saturday evening.

Chema Buceta’s side have already made history this tournament by reaching the semi-finals and will now play for bronze against either Spain or Serbia, tomorrow.

GB fall to a 63-56 defeat against France 🇫🇷 in the #EuroBasketWomen semi-final. Another incredible effort. @rachvanderwal 12p, @chan2211 11p.

Rachael Vanderwal top scored with 12 points with Chantelle Handy close behind on 11, while Temi Fagbenle added 10 – having been held to 3/12 shooting – along with six boards and four assists.

Gruda opened the scoring with a pair of free throws, but would have to wait for over six minutes before scoring her side’s first field goal as GB’s defence locked in in the midst of a 13-0 burst with Vanderwal and Handy accounting for 11 of those.

Valeriane Garnier’s charges hit two triples to close the quarter with GB still in the ascendancy at 16-12. Johannes was just warming up, though with that late three and helped fire her side ahead early in the second.

Handy was on hand to restore GB’s cushion with another three before Karlie Samuelson and Vanderwal followed suit to make it 31-25 with 3:30 to go in the half. Gruda was still impacting the game without her scoring prowess on display and the two teams soon went into the break level at 34-34.

Another block from Gruda on Temi Fagbenle set the tone early in the third with Johannes continuing to sprinkle her magic as Les Bleues seized a 47-38 advantage. Handy hit back again from downtown, then Vanderwal to draw GB closer once more.
The gap would be just six points heading into the biggest 10 minutes in GB’s history. Down 52-46, but far from out.

For those expecting the 2009 champs to run away with the contest, they were left disappointed. This was one of those moments GB were not letting go easily.

Samuelson brought GB within three at 54-51, but the next step proved elusive. France had answers and kept responding, eventually securing the win and putting a halt to the fairytale run from GB.

New heights have been reached, a spot in the Olympic Qualifying Tournament confirmed and a medal still within grasp.