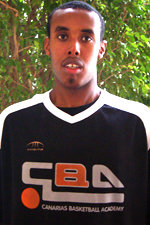 Great Britain Under-18s suffered their second defeat at the European Championships with an 81-38 loss against Sweden in Skopje, on Saturday.

Len Busch’s side next face Ukraine ahead of Monday’s rest day and will be looking to continue to improve as the tournament progresses.

Rebecca Adjeiwaah Dwomoh top scored with eight points, while Esther Little collected nine rebounds to go with four points with nine players on the scoresheet as all 12 played at least 10+ minutes.

GB stayed with their opponents early on before they threatened to break away with a 15-2 run. Amelia Sandie fired in a three to spark a 9-4 response to trail 24-15 after 10 minutes.

Points became harder to come by as Sweden took control, but GB enjoyed a brief positive spell with consecutive scores for Cameron Taylor-Willis and Dwomoh to return the deficit to single figures at 31-22. However, a 10-0 close saw GB trailing by 19 against a side relegated from Division A last summer.

Brahe Ashton continued to link up with Dwomoh for GB, but Sweden kept firing and took their lead out to 30 at 61-31 with Hannah Dawson ending the third with a corner three. GB were held to seven points in the fourth with Sweden closing out the win with the final 10 points.

More learning points for GB and the chance to go again when they face Ukraine at 5:45pm UK time on Sunday.