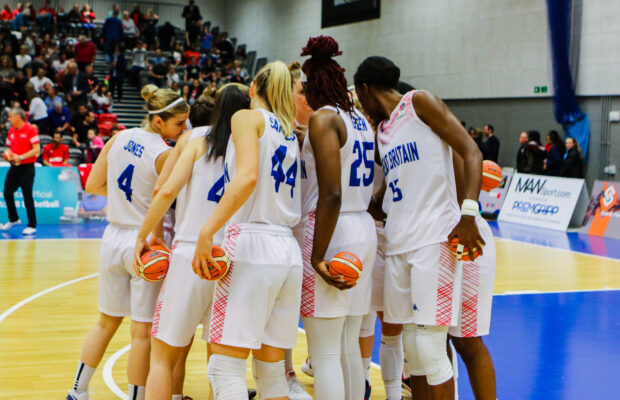 GB’s Senior Women avenged a recent loss to Sweden before pushing hosts Spain extremely close to round out their preparation for FIBA Women’s EuroBasket 2019.

Chema Buceta’s side defeated Sweden 64-56 on Saturday evening to back up their double over Canada in Manchester, and came up just short in a 67-65 reverse against Spain 24 hours later.

Temi Fagbenle top scored in the win with 16 points along with five steals and three blocks, while Chantelle Handy also hit double figures with all 12 points from downtown.

GB had trailed by nine points at 15-24 at the end of the first quarter, but bounced back with a 15-1 burst to start the second and take the lead. They turned a one-point deficit at half-time into a 47-42 advantage with 10 minutes to go and went on to complete their third prep win.

On Sunday, GB raced out to a 13-2 start against Spain with Karlie Samuelson netting the final eight points in the run as part of an 11-point first quarter effort. The hosts erased a double-digit deficit to surge ahead in the second, but Cheridene Green banked in a mid-range jumper to tie the game at 39-39 at the half.

Spain led late in the third in a low-scoring period before Janice Monakana’s three helped give GB a slender 45-47 lead to take into the final 10 minutes. GB led by six at 54-60 heading into the final five minutes, but the lead would change hands throughout a tense finale – eventually sealed by Anna Cruz to save her side from upset.

Two positive performances, regardless of results, to round out preparation games with GB ahead of FIBA Women’s EuroBasket 2019 starting on Thursday. Onto Riga.

GB’s games will be available to watch via subscription over at livebasketball.tv, while coverage is also expected on the BBC Sport website.