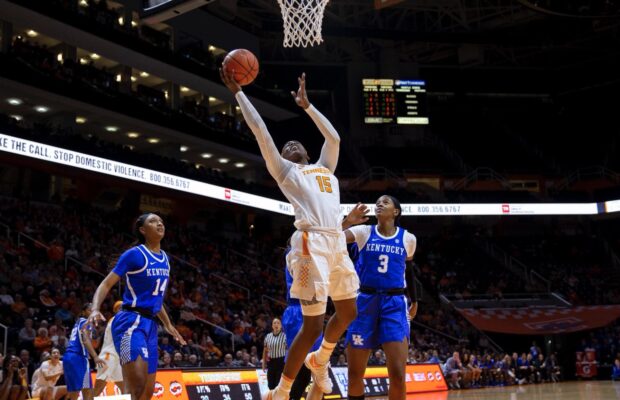 Cheridene Green has been leading the way for the Brits in College in recent years and is now set for a busy summer with the national team as well as fulfilling pro ambitions following graduation.

An international debut at senior level was six years in the making with Green initially selected – by Damian Jennings – in the preliminary roster prior to EuroBasket Women 2013.

Injury curtailed any hopes of making an impression in camp as a 17-year-old, but Green would ensure her first cap was marked with a strong showing after top scoring with 19 points in a tough loss away in Slovenia, earlier this month.

“It was an exciting moment for sure,” she says. “I’ve always wanted to be part of it and hopefully there will be many more to come. I look at Rachael [Vanderwal] winning her 100th [cap] and that’s really impressive.” The squad will need to be whittled down to 12 by the time they fly out to Riga, Latvia later this month, but Green feels no extra pressure in making the cut.

“I try not to think about it, I just do what I’m supposed to do and let things fall into place because I’ve been invited here for a reason.

“We have a mix of experienced and younger players so it’s a case of learning from everyone, getting used to each other and figuring out how to come together as a team.”

Green had already shown her promise on the international stage with the Under-20s in 2012 prior to the invitation to senior camp a year later. Despite going 0-9 in Division A, the Londoner led her side in rebounding – a feat she would repeat two years later.

It was earlier that summer – coming up to seven years ago – in which Green looks back on as a defining moment in forming aspirations of one day making it as a pro, with that dream now not far from becoming reality.

“I still remember playing with the [England] Under 18’s against Portugal (in the semi-finals) and it was a really close game,” she recalls.

“I scored a lay-up late in the game and after all the battling, we ended up winning by seven points.

“During that one small moment, by helping the team and feeling part of a team with all the adrenaline, I felt like I could do this for a long time and want to become a professional athlete.

“Sometimes you can lose the fun when you’re older, but ‘til this day, I still have fun playing the game.” Green averaged 10+ rebounds per game during that tournament with England – led by current GB U18s head coach Len Busch – sealing promotion with the 78-71 victory over Portugal before coming up short against Belarus in pursuit of gold in the final.

And, it was under Busch at Sevenoaks Suns that Green was really able to flourish, not just as a developing player, but as a person in preparing for the next chapter in venturing Stateside – opting to head to ASA College in Brooklyn.

“Sevenoaks was really great for me. I loved my team-mates and being at a successful programme.

“Len is not only a great basketball coach, but he also cared about my well-being and would let me know that I could ‘really do something’.

“I would definitely love to play for Sevenoaks again one day – Len is one of my favourite coaches.”

Green made a big impact at JUCO level, averaging 20+ points per game with a best of 38 in her two years as well as being the number one ranked rebounder.

“It was a big decision for me to go to junior college,” she admits. “A lot of people look down on it, but I didn’t really care – I made the best decision for myself.

“The coaching was different – an aggressive style, but it helped me improve my scoring mentality.

“I had increased confidence, developing post-moves, my scoring – the coach believed in me and it helped me believe in myself and to have fun with it.

“It wasn’t the easiest process, but it definitely made me more independent.”

And, Green wanted to offer her advice to the next generation of British players thinking of making the move to America.

“What I would say is do your research,” she advises. “There’s no pressure, whether you look at academics or your development, do what is best for you.

“Speak to alumni, too, to get a better feel of things – that is something I could’ve done.

“But ultimately, don’t do it for the validation of others, do it for yourself.”

A torn ACL towards the end of her second season denied Green the chance to compete for a National Championship at ASA College. The injury did not deter interest and the University of Tennessee would be the next destination with Green becoming the school’s first international player.

“They were still interested in me even though I was injured and I just wanted to make the best decision for myself.

“I’d never sat out a full season before so I definitely learnt from that.

“It taught me patience. Being patient with my growth, learning more about the game from the bench/sidelines and also helping my team-mates.”

Green returned to action for the 2017-18 season before becoming a starter in her senior year with the Lady Vols making consecutive trips to the NCAA Tournament.

Six double-doubles were tallied last season with Green given the opportunity to increase her production, especially in conference play with averages of 10.3 points and 8.8 rebounds per game in SEC action.

“From sitting out to my first year playing and coming off the bench, it didn’t bother me – I knew I had to be patient,” Green recalls.

“I didn’t want to think about re-injuring myself or doing too much, so I tried to focus on just 2 things every day; to work hard and crash the boards consistently.

“Halfway through the season [junior year] it didn’t feel like I’d had the injury and I never looked back.

“My senior year didn’t go as I’d hope, but I only controlled what I could, I’m glad that I was able to be an impactful player the time I was there and I created great friendships and connections.

“Playing at the NCAA and SEC Tournament was exciting. I just focused on the games and the scout.

“There was a lot of media and people which can be distracting, but I blocked it all out and when the games were over is when I would soak up the environment, like talking to fans or looking in the crowd.”

While Green has already signed to an overseas team, she is determined to put all her focus into the GB national team as preparations continue ahead of FIBA Women’s EuroBasket 2019.

“I feel like I’ve definitely improved since the season ended at Tennessee – I was back working out after a few weeks, improving and adding things to my game with a former Lady Vol.

“I’m not as anxious as I used to be – I have an idea of what I want to do, but my first and only focus is with GB.”

The past three years that I have spent here at the University of Tennesse has been a life long experience that I will cherish forever. There were ups and downs but nothing is perfect. I have created bonds and memories with people that’ll continue afterwards and I just want to say another thank you. #lvfl #nextchapter 🤟🏾🍊🧡

WNBA star Temi Fagbenle returns to the fold to boost Chema Buceta’s side and GB are back in action on Wednesday as they take on Canada in Manchester (tickets HERE).

A welcome return to home soil for Green and the prospect of playing with familiar faces in the crowd looking on.

“I’m excited about playing on home soil – it’s definitely been a while and one of the things I was really looking forward to.

“My friends and family are looking at coming to the game and I didn’t have that at Tennessee – however my mum did come out on my senior night to watch me play.

“Having that chance is very comforting and I’ve always felt that’s an important thing to have at some point.

“With everyone at camp together we can now start to get things rolling and I’m ready for more learning and having the opportunity to play with experienced players such as a Temi!”