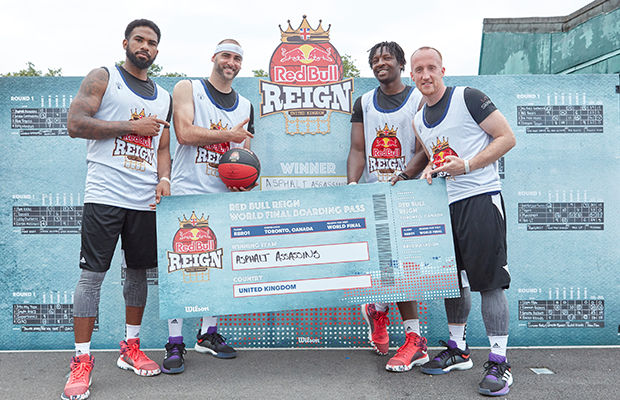 Asphalt Assassins, based in London, started the day slowly with a loss in their first group game but went on to dominate proceedings, cruising to victory in the final. Meanwhile Sharks – also from London – grew stronger throughout the women’s tournament finally clinching victory by a single point in a dramatic final.

Each side will now head to the global final in Toronto, Canada.

Red Bull Reign made its debut with three qualifiers in London where teams fought to earn a spot in the national final which took place on Clapham Common. Across the world, hundreds of teams across 16 countries put their skills to the test in the one of a kind tournament.

Milly Watkins, who captained Sharks, was in disbelief: “I can’t really believe it. We were just trying to play each game as it came – it was such a close finish with the free-throw to tie the game. We’re all so excited to be heading to Toronto!”

Justin Hitchman from Asphalt Assassins added: “We’re ecstatic. We worked hard to get here and get the win so I’m really happy to be here with my teammates. We started really sloppy, we lost a couple of games but we picked it up – we started figuring out our strengths and that’s what we executed.”