Loren Christie striving to be the best - Hoopsfix.com

Support
Home / Features / Loren Christie striving to be the best

Loren Christie striving to be the best 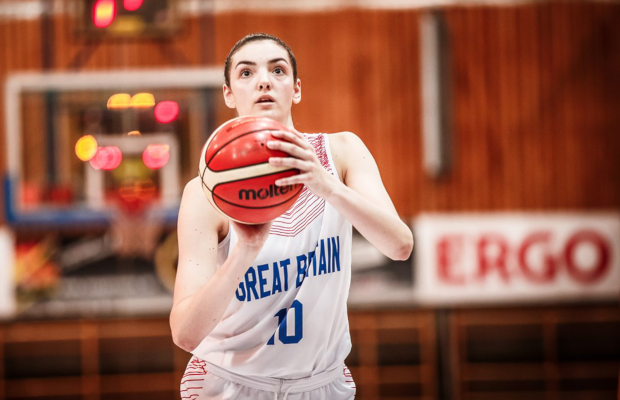 Loren Christie is the only player to represent Great Britain at all three junior age groups in international competition since the national teams were brought together in 2017.

Four European Championships in three years, a WEABL Championship title and an upcoming move to the University of Buffalo, all driven by the 18-year-old’s desire to simply be the best.

That trait was key in her introduction to basketball having followed her brother into the sport, joining Oaklands at the age of 14.

“I remember they divided the court with the good players at one end and the bad players at the other – that’s where I was,” reflects Christie.

“I wasn’t naive, I knew I wasn’t that good, but I didn’t want to be at that end and never wanted to be in that position again.

“I have a need to be the best at what I’m doing, whatever it is.

“When I identify something I need in my skillset, I just keep working on it over time until I get it.”

And, Christie’s selection to take part in the inaugural Under-19 Women’s game at the 2019 Hoopsfix All-Star Classic, in Brixton (TICKETS HERE), reflects her rise as one of the brightest talents of her generation in the UK.

A regular in the stands at past editions of the Classic, Christie is now looking forward to her chance to shine on the court.

“This is really big for women’s basketball,” she declares. “The Hoopsfix All-Star Classic gets so much media attention and excitement with all the players.

“I’ve always gone and it gets bigger every year so to have a girl’s version, it completely changes everything.

“We’ve got enough talent and it’s a good opportunity to show that. And for me to be one of those players to be a part of it is a great feeling.” 50+ league appearances in three WBBL seasons has given Christie the exposure of competing at the top level and opportunities to brush shoulders with some of the biggest names in British Basketball as well as the influx of overseas stars.

Christie came on strong over the course of a debut campaign with Oaklands Wolves in 2016-17 before a move to Barking Abbey, starting the recent season with a double-double against her former side and finishing with averages of 8.6 points and 4.6 rebounds per game.

“When the opportunity opened up [with the WBBL team], I was there for the experience and sat on the bench.

“But I wanted to be the best I could be and I became a starter on the team [at Oaklands].

“There’s always something you can add to your game and the league has been great to realise that, particularly with the different styles.

“You look at Stef Collins with all her experience and the way she plays, it’s different to a Cat Carr – but you respect them equally as they’re great players.

“The way Mark (Clark) coaches, you play every position where you have an advantage and that has really helped me.

“Some games I would play ‘4’ the whole time, then play the ‘3’ or even at the ‘2’ – Mark prepares you for everything and I’m lucky for that as it’s helped a lot for my development.”

Those experiences would pay dividends when it came to the summer of 2018. Christie was given the chance to fight for a place in the final 12 on the GB Under-20 roster and would end up making it to Oradea, Romania for the European Championships as well as later heading to Austria with the Under-18s.

“I went into the 20s camp not expecting to be picked and just being there for the experience,” she admits. “Playing with Savannah (Wilkinson) was great and I was trying my hardest, but there was no pressure to make the team.

“On one of our trips, I had a good game – just being able to play my game at the 3/4 and I was comfortable in that position.

“Players being a lot better than me, more physical, I knew I needed to try harder and had to be better – it’s a different game at that level.

“When I came back for the 18s camp – I felt a bit more pressure having just played for the 20s and I felt I needed to do well.

“I played a different position, the things required from me were different as I was there more to facilitate, set screens, big dominated stuff.

“Playing two completely different roles was challenging but I felt prepared for it with the work I had already been doing.”

The year before had seen a different role for Christie after being handed the captaincy in the first-ever Great Britain Under-16s squad in 2017. Having made her international bow with the England Under-16s in 2016, the chance came to have an even bigger impact with more responsibility.

“It was really big for me being made captain,” she says. “It gave me a lot of confidence and showed that Matt (Harber) and Kenrick (Liburd) believed in me.

“The fact it was the first GB team made it better. It’s big for everyone, it’s always an honour to wear the national jersey.

“I was one of the oldest players that year, but I’d be vocal whether I was captain or not – that’s the type of person and player I am.

“We had a lot of meetings as players and had some close games. I remember one game being close and I said ‘we’re not having the same result today’ and every one of the players stepped up and we got the win – something I’m still really proud of.”

GB had edged out Iceland for a 43-42 success – their second victory of the campaign – with Christie pulling down 14 rebounds as part of a strong finish to the tournament.

The taste of success was more prominent in the WEABL with Barking Abbey in 2018 as the team went all the way to re-capture the Championship title.

“That season taught me a lot,” she reveals. “I wasn’t one of the main players, the girls on my team led us, but it was great to be part of that team and the success we had.

“I learned that a leader needs to step up – they did that and it’s something I took into this season knowing that I had to step up.”

Christie followed up with a stellar year in the WEABL, posting averages of 16.1 points, 8.4 rebounds and 2.2 blocks per game in making the All-First Team in the Southern Conference.

And, it’s the leadership qualities that have been evident domestically and on the national teams, that Christie is looking to take forward into her next chapter at the University of Buffalo in the Mid-American Conference.

“I’m going to go in as a leader, continue being vocal and try to bring a bit more movement on the team.

“With the position I play, I’ll be able to give advantages inside and out. I want to get bigger, more explosive and more powerful and to continue working on my shot.

“It’s just going to be a lot of hard work and I’m really looking forward to it.”

She added of the process: “It was a lot more challenging than I thought. I was fortunate to have a lot of schools come to me, but there was a lot to take in as I really had to sort through all the options.

“My coaches at BA and especially Steve Vear (She’s Got Next) were so helpful with a lot of the work and I couldn’t have done it without them.”

The Under-19 Women’s game at the Hoopsfix All-Star Classic on Saturday 1st June in Brixton brings together the Class of 2019, allowing one last game on home soil before the majority fly the flag for British basketball in the States.

“It’s going to be great,” Christie concludes. “There are girls I haven’t played with/against and it will be the last time I get to play with a lot of the players for a while so it makes it special.”