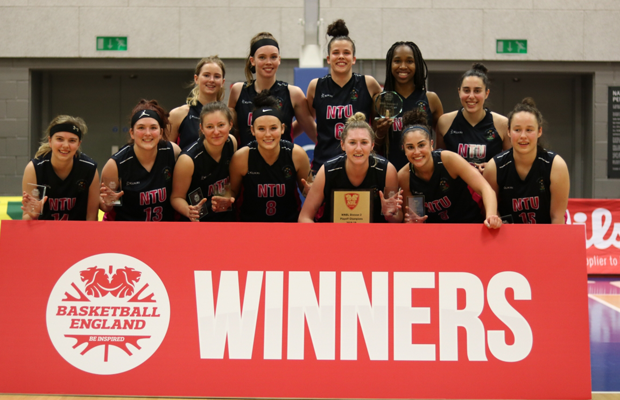 Nottingham Trent University produced the perfect end to their season, remaining unbeaten on the year as they won the WNBL Division 2 Playoff Final 91-66 against local rivals Derby Trailblazers on Saturday at the NBPC in Manchester.

Derby resisted NTU for as long as possible but Trent’s trio of Vicky Gray, Sadie Russell and eventual MVP Jolanna Ford combined for 70 of their side’s points, with all three showing their versatility throughout. The longer the game wore on, the further Nottingham pulled ahead, allowing their impressive travelling support to get into the party spirit for much of the 2nd half.

Ford’s selection as the game’s MVP was a straightforward one after the talented shooter poured in a game high 33 points to go with 10 rebounds, two assists, a steal and a block for a truly dominant double-double.

Coming into the contest, Derby’s Alex Haley (24 points, five rebounds, five assists, three steals) posted 28.4ppg in the regular season, plus scores of 41 and 31 during the Trailblazers road to the Final. If Derby were to knock off their unbeaten foes, it was always likely that Haley would need a big game. However, NTU looked to have game planned perfectly for the talented scorer as the Derby captain shot 1/7 in the opening quarter, allowing Trent to seize a 25-16 lead after 1.

The 2nd provided more of the same as Derby struggled to find clean looks whilst Trent forged ahead. Nottingham’s captain Vicky Gray (18 points, five rebounds, eight assists) scored 16 of her 18 points in the 1st half, with eight in each quarter to provide a steady stream of offence. Ford repeatedly set up camp in the high post, happy to receive the ball with her back to the basket before displaying great agility and an explosive first step to find her way to the basket. Three NTU players all hit double digits in scoring by the half and their 47-30 lead by the buzzer was no accident.

Regular season Player of the Year Sadie Russell (19 points, 10 rebounds, six assists) was another string in the NTU bow, and she turned both scorer and provider in the 3rd to keep her side moving. Chedell Cruickshank (14 points, five rebounds, two assists) showed some good touch around the rim on the drive to keep Derby in touch, but an even quarter simply kept the NTU lead intact at a time when the Trailblazers needed to be making inroads if they were going to stand a chance in the final 10 minutes.

In the final frame the tempo of the contest fizzled somewhat as the Trent lead only grew. Haley scored 18 of her 24 points in the 2nd half but it wouldn’t be enough as Ford and co. poured it on to finish strong. It was a post to post win for Nottingham Trent and a deserving way to finish their debut season in the WNBL.

Nottingham Trent University Coach Louise Waghorn: “I thought the girls came out and played really well. We’ve been working hard and we were able to showcase everything that we’re about. Playing as a team, playing strong and we’ve got so many threats that it’s hard to stop us which is why we’ve gone unbeaten all season. Obviously we knew what Derby were about which helps a little bit, but everyone was ready to play. They’re a tough team with some talented players but we were just able to outplay them with the depth in our squad.”

MVP Jolanna Ford: “Honestly, this feels great. Me and my team came out ready to play, with the game plan, and I just tried to do everything I can for my team. It just feels great. Going unbeaten is a really good feeling. We work extremely hard, hours in the gym, just to come out ready to play. It’s an unbelievable feeling and I’m so glad we were able to go undefeated.”