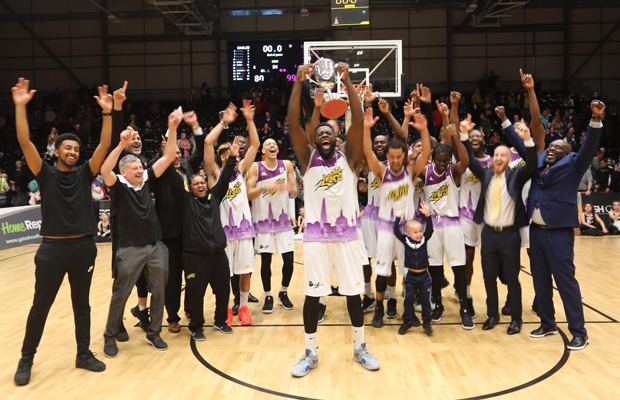 London Lions clinched the BBL Championship title for the first time after beating Esh Group Eagles Newcastle 99-80 on the road.

Vince Macaulay’s side move to 26-6 to wrap up the league triumph with a game to spare, riding seven three-pointers and 35 points from Justin Robinson to overcome the disappointment of failing to close out the title last weekend against Cheshire.

“We tried to bounce back from the last game more focused,” reigning MVP and Lions guard Robinson said after the game.

“We had our game plan, we executed and we stuck together to make sure we got through adversity as a team. And, we came out on top. Obviously Newcastle is a dangerous opponent, no matter who’s healthy and who’s not. So, we came in and just laid it on them.

“For me, the reason I came back was to win silverware, since all this stuff means nothing if you don’t win. I want to go down as a winner and it’s our first league championship as a club and in our history, so it’s massive and it means so much to us and the fans.

“I’m sure Sunday [when we return home], is going to be a big crowd and they’re going to give us a round of applause and a standing ovation, so it’s huge.”

It makes it at least a double for the London side this season, adding to their Cup title from January.

“For me personally, it’s a vindication of what I believed all along, trying to put as many British players on the floor. For what we did in Hemel, for what we did in Milton Keynes, for the belief of people like the Mayor of London and the GLL had in us – to put us in the Copper Box. Also for the belief that Justin had to come home.

“It’s tremendous I’m just pretty speechless really in as far as what we’ve done, but obviously it’s not about one game. It’s about everything we’ve done over the last 32 games.

“We all know about Leicester and Newcastle, such storied franchises, and it’s fantastic that it was able to go more or less to the last weekend and we’re happy to have been in the same company as those guys as a Championship winner.

“It’s also the first time that a London team has won this in 21 years. You know, Kevin Cadle and Jimmy Rogers – Rest in Peace and thank you very much.”