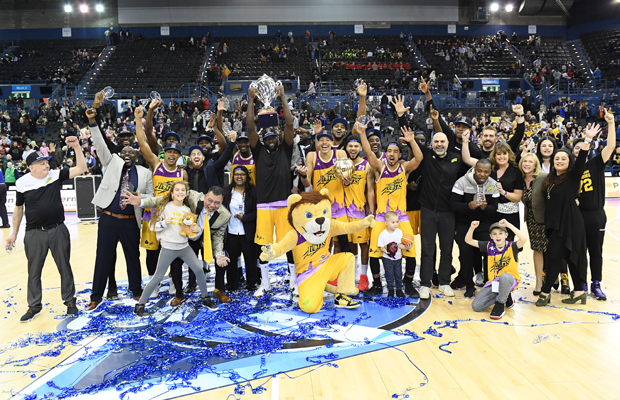 London Lions picked up their first piece of Silverware since 2008 and their first major title since moving to the capital with a 68-54 win over Glasgow Rocks to claim the 2019 BBL Cup title on Sunday at the Arena Birmingham.

Brandon Peel picked up MVP honours with 21 points, 14 rebounds and 3 assists, as Lions prevailed in a defensive slugfest that saw Rocks held to just 20 points in the first half.

“It’s very special for the club and all the individuals on the team,” Vince Macaulay, Lions Head Coach said.

“We are very proud to have come through against the Rocks. Yes, we’re winning a title now with the guys you see in yellow, but you’ve got to remember the people who helped us get here along the way,” reflected Macaulay when asked about the team’s journey to the Final.

“Mike Martin, Julius Joseph and Rod Brown and all the guys who’ve been with us up until this point.

“We’re dedicating our season to Jimmy Rogers and Kevin Cadle and as far as we’re concerned this is one step out of four.”

Justin Robinson finished with 13 points, 7 rebounds and 7 assists, whilst Kervin Bristol and Ladarius Tabb added 12 points each, the latter adding 11 rebounds, but it was Peel who stole the show.

“Captain Joseph Ikhinmwin stressed to us before the game that every game is a championship game and every team is going to come out and give us their best shot,” he said.

“This game proved that from start to finish – it was definitely a fight right down until the end. In the end I think we executed a little bit better and we gritted it out on defence and that’s how we came up with the win”

“We played our game and stuck to the game plan and pulled through.

“We never felt comfortable and always felt like they could comeback at any time, so we didn’t take any play for granted.

“I feel like we have a special group, but who knows if this group will be back together next season. We have to make the most of every opportunity we get.”

Kenny Carpenter got going in the second half on his way to a team-high 13 points for Glasgow, with Bo Ziegler having a 12-point, 10-rebound double-double and Kieron Achara joined them in double figures with 11.

“London came in with a really good game plan and took away a lot of our strengths really early in the game,” Darryl Wood, Rocks Head Coach commented. “We need to take some key learning points away from today and how we handle situations.

“We’ll continue to improve and get better.”

“First and foremost, congratulations [to the Lions]. They’ve shown all season what they’re capable of and they stepped up again when they needed to.

“They jumped on us early – it was really scrappy, we weren’t making shots.”