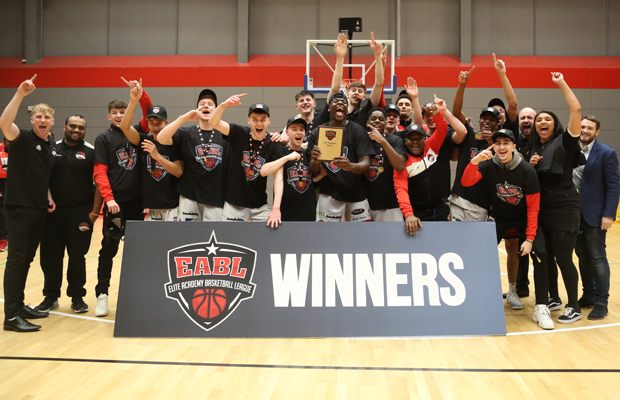 Charnwood College claimed their second EABL national championship title with an incredible fourth quarter comeback for a 75-63 win over defending champions Barking Abbey, who were denied what would have been a competition first three-peat.

With Charnwood trailing by 19 heading into the final period, they had a remarkable 31-0 fourth quarter as BA collapsed whilst struggling through foul trouble.

Charnwood got their revenge on BA, having been knocked out of the semi-finals last year by them, and added the 2019 title to their 2016 championship, whilst also making it a double this season with the girls having picked up the WEABL title earlier in the day.

Niall Harris continued his impressive season, picking up MVP honours with 17 points – 8 in the fourth, 5 rebounds, 8 assists and 3 steals, Hosana Kitenge was a force inside with a 13-point, 16-rebound double-double, whilst Joel Bielak and Blaize Sagna added 16 points apiece.

“It feels great,” Harris said after the game. “Seeing as we were 19 points down in the third quarter, fighting back in the fourth quarter, they didn’t even score a point, it feels great man, it was a great team win.

“We had to just keep pushing, stay together as a team and keep fighting all the way.”

“(It’s) Amazing. I’m super, super proud of these guys, to hold them to zero points in the fourth quarter, was incredible defence. We worked a lot on defence this week, we know BA can score, they’re an excellent team, Lloyd does a great job. But super proud of my guys, especially in the fourth, they never gave up, super high character.”

With Charnwood having controlled the majority of the first half, BA dominated the third quarter, besting their total from the first two periods (32-31) as they began hitting from beyond the arc after starting 1-of-14. Having outscored Charnwood 32-9 in the period, they looked comfortable and had all the momentum heading into the fourth, going into the final break on a 12-2 run.

However, it soon changed. Bielak scored a quick five points to open the quarter, and Sagna, Kitenge and Harris all contributed as Charnwood gained confidence whilst BA’s foul trouble continued to mount.

Adebayo lasted 20 seconds before heading back to the bench with 4 fouls, and then had another 2 minutes on the court with a little under 5 minutes left before fouling out with another offensive. BA committed 12 turnovers in the fourth, 8 of which were unforced, and were unable to get to the free throw line even once, as Charnwood’s raucous crowd added to the mounting pressure.

With Adebayo, Jonathan Brown and Robin Bedford all fouling out, BA’s bench were unable to pick up the slack, whilst Charnwood continued to ride the momentum, clamping down defensively, whilst getting open looks and converting at the free throw line, where they went 12-of-17 in the final period.

Ade Adebayo’s 13 points, 7 rebounds and 4 assists led BA, as they received 12 apiece from Chris Feeney and Nathaniel Powell, the latter adding 12 rebounds for a double-double.