Myerscough Advance to the EYBL SuperFinal 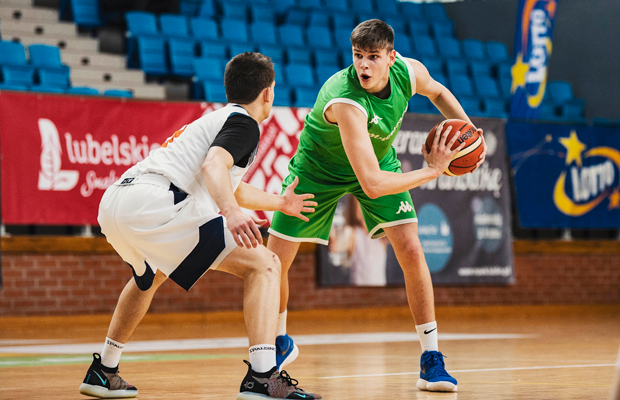 Myerscough has advanced to the European Youth Basketball League (EYBL) SuperFinal following a third place finish and 11-4 record overall in its debut season in the competition.

Myerscough – who also qualified for the EABL Final Four last Wednesday – used an eight-game winning streak that spanned Stages II and III to secure its place in the final, with resume building victories against Zalgiris (the same Under-18 squad competing in the adidas Next Generation Tournament this season) and BS Riga (an Under-20 side). The streak was snapped in the last game of the regular season versus BC Tsmoki-Minsk, which saw the Preston-based Academy finish as runners-up in Lubin, Poland.

Sanmi Fajana helped Myerscough get Stage III under way with a win, scoring a season-high 22 points in a 66-32 rout of KS Cracovia. He then backed that performance up with his fourth double-double (12 points & 10 rebounds) of the year in a narrow victory over Wladslawowo.

Myerscough then took care of business against hometown Lublin, setting up a crucial matchup with Riga. Okros would lead Sco with 17 points and Amari Williams added 13 points, 13 rebounds and seven blocks in a three-point win against Riga to book their SuperFinal spot.

The current DENG Camp No. 1 rated player Mate Okros has continued to prove his class, as he earned EYBL All-Star Five honours for a second-straight stage, lifting Myerscough to the clinching win over Riga. Okros is the team’s leading scorer at 13.7 points per game, which ranks ninth in the league.

“I think we’re still trying to process it,” said Myerscough coach Neal Hopkins. “Maybe it hasn’t quite sunk in yet because we didn’t have the expectation that this was something we were going to do and it only came down to the last two games where it became a reality.”

‪#MySco is Final Four bound in its first year in the #EYBL after finishing the regular season with an 11-4 record!‬

A post shared by Myerscough Basketball Academy (@myerscough_basketball) on Feb 24, 2019 at 6:38am PST

The SuperFinal, which was originally scheduled as a four-team final, will now consist of six teams and take place May 10-11 and be hosted in Tallinn, Estonia.

BA Tallinn Kalev (Estonia) is the No. 1 seed headed to the SuperFinal and is joined by No. 2 BC Tsmoki-Minsk (Belarus), No. 3 Myerscough (England) and No. 4 BC Zalgiris (Lithuania).

Meanwhile, the two finalists of the Central Region in Pecs, Hungary, will be invited to join the EYBL SuperFinal in Tallinn to make the final six, with the chance of another English team joining Myerscough, as London United are in the six team field, along with NBA Academy Africa, Nyiregyhaza Blue Sharks, Keila BS, Szolnoki Sportcentrum and Basket Rimini Crabs.

Kepe up to date with how Myerscough get on in the SuperFinal at MyerscoughBasketball.co.uk.