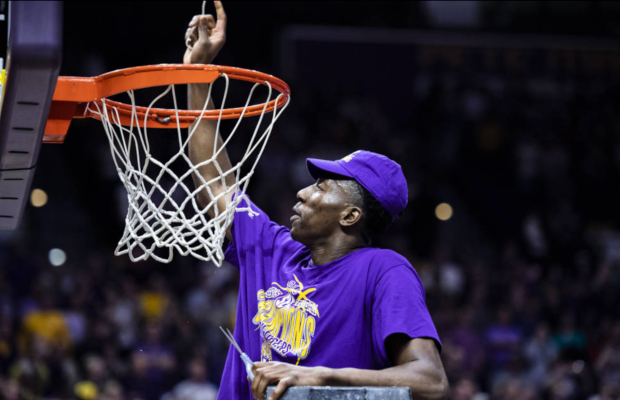 Kavell Bigby-Williams posted a double-double to help LSU secure the SEC regular season title for the first time since 2009, on Saturday night.

On his senior night, KBW finished with 10 points and 11 rebounds in the 80-59 win over Vanderbilt to finish 16-2 in conference play.

LSU interim head coach, Tony Benford said: “We had a segment last night in the hotel – with it being senior night we let Kavell Bigby-Williams speak to the group. He did a great job.

“Then we went around and everyone has a chance to share things with Kavell. I’m just really proud that we were able to win for him and that he was able to go out a winner here. We’re not done yet.”

All I can say the man above keeps blessing me. Can’t begin to say how grateful and thankful I am to have my family come out to my senior night, winning a regular season 💍🏆 on senior night and being able to get this one for my Bro who is looking down smiling. #godisgreat #forever44❤️🕊 #countyourblessings #bootup #lsu 🏀🙏🏾

LSU head into the SEC Tournament as the No.1 seeds as they head straight into the quarter-finals with the aim of making a return to the NCAA Tournament.