Worthing Thunder Get Past Loughborough for National Trophy Title - Hoopsfix.com

Worthing Thunder Get Past Loughborough for National Trophy Title 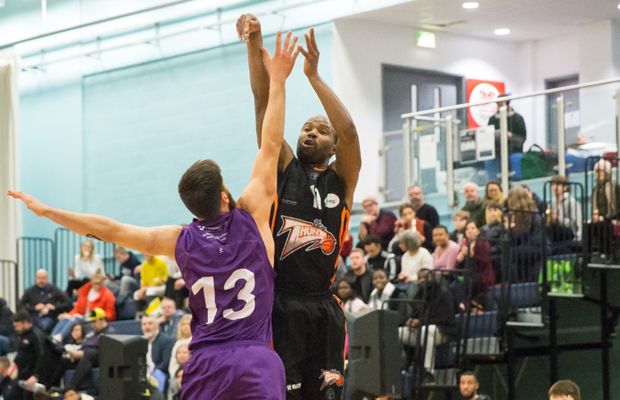 Worthing Thunder fought from behind for an 84-80 victory over Loughborough Riders to claim the 2019 National Trophy title on Sunday afternoon at UEL SportsDock.

Jorge Ebanks had 12 of his 20 points in the third quarter, and added 5 rebounds, 5 assists and 6 steals to pick up MVP honours, as Worthing stole a game where they trailed the majority of the contest.

“It feels amazing,” Ebanks said. “I’ve lost two of them already in my career, so the third time was definitely a charm, I’m just happy to get the win today.

“It’s a long game, you start out slow but we gained the momentum in the second half and got going really to turn it around for us. I was just trying to help my team win in any way I could, my goal on this team is to win , so whatever they asked me to do I’ll do it.”

Taylor scored a quick four points to give Thunder their first lead of the final period with 2:45 remaining, and it soon turned into an 8-0 run that Loughborough would be unable to claw their way back from.

Riders were led by 21 points from Kyle Jimenez, 16 and 6 assists from Alex Roberts, and 15 from Hosana Kitenge, but the National Cup winners were unable to add a second title to their cabinet this season.

“They made some timely plays when they needed to. Second half we weren’t able to string together multiple stops and that allowed them to get going in transition which was a big key to the game. When they’re making spinning 360 shots you gotta live with it.

“…Hell of a game. It’s our second final of the year, these are the games we want to be playing in. I’m really proud of the group and the guys. Considering what we have and what we’re up against, it’s very special to enjoy these moments with the team.”