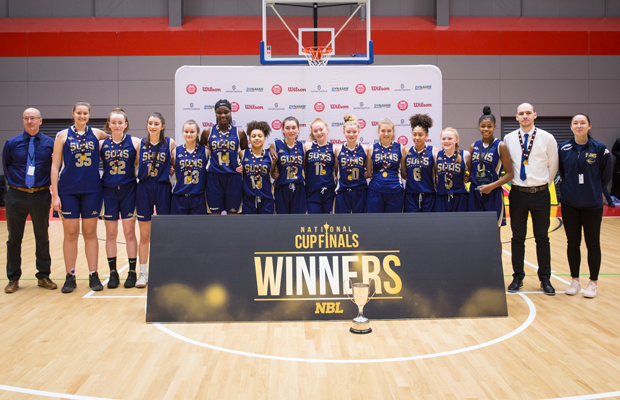 Sevenoaks Suns pulled away in the fourth for a 83-69 victory over Nottingham Wildcats to claim the 2019 Under-16 Girls National Cup title.

“It was a great team effort and we’re all really excited,” Fournillier-Onadeko commented.

With Sevenoaks Suns having been in control the majority of the contest, Nottingham made a big push, clawing their way back from 14 down to tie the game up at 60 two minutes into the final period.

However, Sevenoaks responded with a 15-3 run to gain a cushion and cruise the rest of the way to the title.

“I thought the girls played terrific and everyone contributed,” Sevenoaks Head Coach Len Busch said. “It was a good team effort, we had a little shaky start in the first quarter but we settled down and played better defense the rest of the way.”

Nottingham were led by 25 points from Masie Evison, and a 13 point, 13 rebound double-double from Mariam Olawoyin.

“They have a lot of height which was hard to contain. We were down by 14, I knew we weren’t out of the game, I knew we would get back into it, I thought the momentum would shift but he (Len Bush) is one of the best coaches in the country and made the right decisions. We didn’t do the little things well and Tamara took advantage, put the team on her shoulders and carried her team to the trophy.”